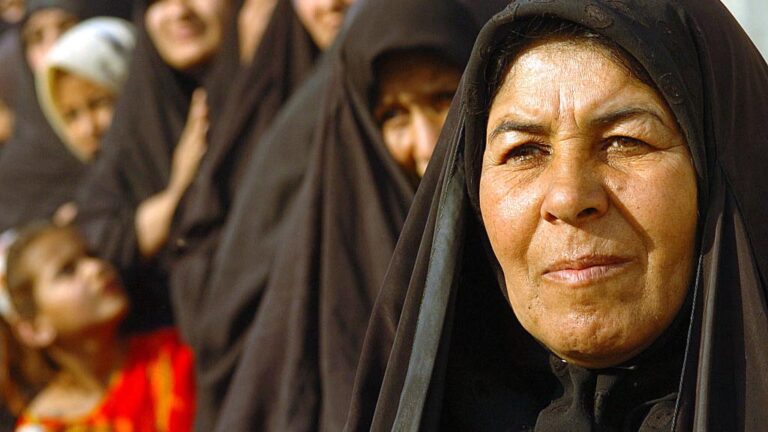 Iraqi law gives women many rights, but in practice it looks different.

Iraq has long been marked by conflict and is today facing a recovery process after large parts of the country were occupied by the terrorist organization Islamic State. Katarina Carlberg from Kvinna till Kvinna talks about the current situation for women in Iraq.

In the book “The last girl” Yazidi human rights activist Nadia Murad testifies about her time as a prisoner of the terrorist organization IS in Iraq. It is a difficult book to read, even for the thick-skinned reader. The violence described is almost inconceivable to anyone who has not witnessed something similar up close. Unfortunately, Murad's story is not unique. Gross violence has long plagued the Iraqi people, even after the fall of Saddam Hussein as a result of the US-led invasion in 2003.

Iraq is one of the countries where the Swedish women's rights organization Kvinna till Kvinna works on site to support women in conflict-affected areas. Katarina Carlberg is the organization's field representative in Iraq and is an expert on the situation of Iraqi women. When I call Carlberg, she is in the city of Erbil, where she travels regularly as part of her work.

Katarina Carlberg explains that contradictions between different groups came to the surface after the invasion in 2003. However, she doubts that the spread of religious beliefs, languages ​​and ethnicities would in itself be a root of the conflict.

- That in itself does not have to be a cause. A disintegrating society and non-functioning social functions can strengthen the feeling among different groups that there is no point in being a united country. Both Iraq and Congo are struggling with it to a certain extent, says Carlberg, who previously worked as a representative in Congo.

Deep-seated conflicts affect all parts of society, not least the social norms that govern the role and participation of women in society. Katarina Carlberg explains that there are examples of how women have become more involved in society as a result of crisis and conflict, when men are forced to the front, women have to make more decisions at home. However, this is not the situation in Iraq.

- One direction that is seen is that societies in crisis and conflict often go back to more patriarchal and conservative values, this has unfortunately been seen more in Iraq, explains Carlberg.

In December, Nadia Murad was awarded the Nobel Peace Prize, something that Katarina Carlberg hopes will put pressure on the Iraqi government. They should expand their work to help citizens who have been victims of violence. However, one must not forget to look at the whole, she points out.

- What you want to avoid is that you end up in a dead end and make the analysis that IS did this to a specific group of Iraqi women. Instead, one should broaden the perspective that violence against women and sexual violence is a problem in society as a whole.

Carlberg says that Kvinna till Kvinna supports a number of local women's rights organizations that work in various ways with Iraqi women's rights, some of which work actively to provide women with violence with legal support. Women's rights are defended in the civil law part of Iraqi law. Nevertheless, as a result of poverty and lack of security, the country has major problems with child marriage and strict patriarchal norms. Women's statutory rights cannot be taken for granted either.

- There is a group of parliamentarians who repeatedly try to push through a change in the law so that the civil law legislation will instead follow religious laws. This could have had very negative consequences for women, says Carlberg.

A transition to such religious legislation would have made it possible to marry off girls as young as nine years old. Despite the fact that the proposal has come up in Parliament several times, it has so far not been successful.

- Actually, the legal protection for Iraqi women is quite good. Marriage to minors, for example, is not permitted by law. The civil law in Iraq today is secular, but there are several examples of conservative currents having increased, says Carlberg.

There is no doubt that the country is facing major societal challenges. Katarina Carlberg's work is hampered by practical challenges and the security situation must always be taken into account. However, she points out that there are many positive forces in Iraq that are constantly working for improvement.

- It is very fun to work with Iraq. Sometimes it can be heavy and difficult, but you meet a lot of activists and organizations who really believe in what they do. They work extremely hard and it is incredibly inspiring.