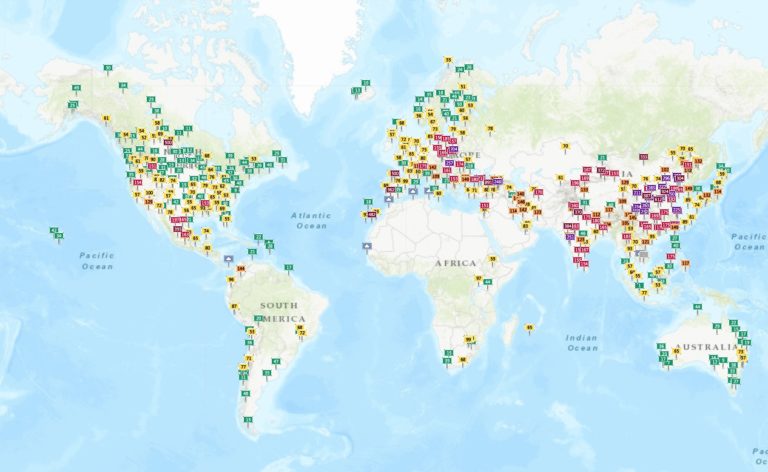 Air pollution is a growing problem in the world. It is difficult to estimate exactly how much damage they cause, as the relationship between exposure and damage depends on many different factors. It is necessary to be exposed to dangerous air repeatedly and the damage to health problems occurs over a long period of time, therefore it is also difficult to say with certainty When the damage was caused and of what. But one thing that is certain is that air quality around the world is deteriorating and affecting us all negatively.

The World Air Quality Index (WAQI) is a project to pay attention to and measure air pollution around the world. They use data from organizations such as the World Health Organization (WHO), the UN agencies for environment and industrial development, UNEP and UNIDO and the World Meteorological Organization (WMO). Since the problem has proven to be worst in big cities, this is where most measuring stations are located. Since 2007, WAQI collects data from various measuring stations and displays it in real time on their website in an interactive map. This makes it easy to get an overview of the current situation, and it is also possible to get a forecast for the coming days. The interactive map uses the same scale for air quality as most environmental authorities in the world. The scale is divided into six steps from green to dark red, where the green color means that the air quality is good, while the dark red signals so much polluted air that everyone should avoid all outdoor exercise.

China's capital Beijing is marked in dark red on the map, which most people probably expect given the media reports of recent years. Stockholm has its measuring station on Hornsgatan - the busiest street - and there it is yellow. The yellow color suggests that active people and people with respiratory problems, such as asthma, should limit prolonged exertion outdoors. Air quality is acceptable, but some pollutants can potentially cause moderate health problems for a small number of hypersensitive individuals.

It would be interesting to investigate how the air quality is been historical and how it has developed. Unfortunately, this is very difficult, as data from the WHO, for example, do not show when in the year, or for how long the data is collected for most countries. This makes the data impossible to compare over time. Something that is noticeable is still the reporting of poor air quality and people's experience of this. In some cities, such as Beijing, there is a visible change that is hardly necessary to debate - air quality has clearly deteriorated.

According to a report from the Swedish Environmental Institute IVL, air pollution causes around 7600 premature deaths in Sweden every year. Similar studies have been done around the world where air quality is much worse and where many more people live. The studies point out that it is very difficult to say with high certainty how the change in air quality is related to the number of deaths. This is a recurring theme in the climate debate: everyone seems to agree on the ongoing deterioration of our environment, but exactly what it is due to and what consequences it leads to is difficult to prove and thus constantly up for discussion. This is despite the fact that it should be irrelevant, because regardless of the exact causes and consequences, we must strive to take care of what we have. Our potential alternatives are thousands of light years away and perhaps our planet is the only one of its kind - the only one that suits us.