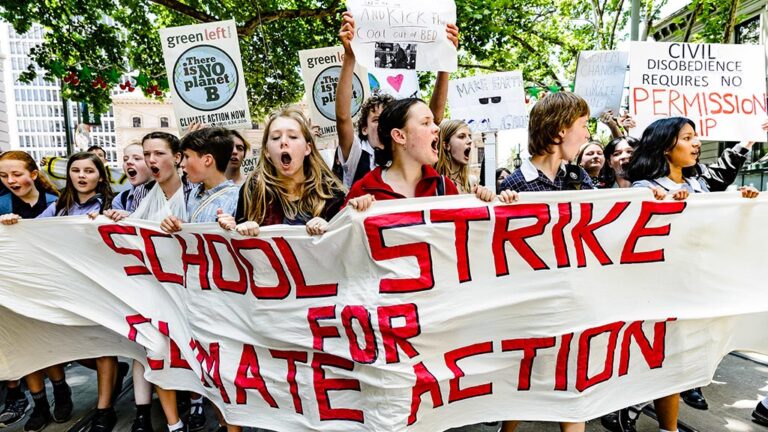 This week, Greta Thunberg and the Fridays for Future movement call on adults and trade unions to join the global school strike. But in Sweden, none of the major unions have wanted to go on strike for the climate. Quite right, says Aftonbladet's lead writer Daniel Swedin.

"The climate issue cannot be resolved through an agreement between, for example, the trade union Kommunal and the employers' organization Almega, simply because employers alone cannot meet the strike demands," writes Daniel Swedin.

But Erik Bonk of the trade union SAC Syndikalisterna does not agree. He believes that we must question the system that is based on ever-growing profits. SAC has therefore, as the only Swedish trade union, decided to go on strike for the climate on Friday.

“Class struggle is no longer just the struggle for the means of production. It is the fight for the planet's survival ", writes Erik Bonk in Dagens ETC.

Both Prime Minister Stefan Löfven and Minister of the Environment and Climate Isabella Lövin were present this week at the UN summit on climate in New York. But at home, they receive harsh criticism for an inadequate climate policy. Aftonbladet's editorial writer Pernilla Ericson demands honesty and courage from Prime Minister Stefan Löfven, in a country where we live as if there were four globes.

Kalle Sundin, investigator at the trade union institute Katalys, calls the government's policy both "pathetic" and "bourgeois madness". He believes that the autumn budget prioritises tax cuts for high-income earners over climate investments.

"One thing is for sure: what we get now is not enough - we will not achieve the climate goals with cloth bags and small nature conservation reforms", writes Kalle Sundin in Aftonbladet.

But criticism of the opposition is perhaps even tougher. At the same time as Swedish young people went on a climate strike, bourgeois party leaders sat down on a chartered plane to Tel Aviv to celebrate the party fixer Mikael Bindefeld's 60th birthday. At the same time, the Moderates gave a proposal to sharply reduce the tax on petrol and diesel. Something that made Aftonbladet's lead writer Jonna Sima react. "The Moderates 'move and the Swedish celebrities' partying in Tel Aviv is like watching the orchestra that is said to have continued to play when the ocean steamer Titanic went under," she writes.

Anna Tibblin from the organization We Effect believes that the Swedish party leaders should make some excursions when they are still in Israel. With a sarcastic tone, she suggests the wall that encloses many Palestinians, and that party leaders should stop and talk to a Palestinian woman about human rights and lack of electricity and water.

"Ebba, Nyamko and Ulf, it's clear that you should be free and go to a party. Everything else had been envious. But if you go to Israel, it is important to see the whole picture ", writes Anna Tibblin on Svt Opinion.

The climate strikes and Greta Thunberg

That is why we are on strike for the climate
Erik Bonk, Dagens ETC

This is how the adult world can take Greta seriously
The editorial staff, Expressen

Time to be honest about the climate crisis, Löfven
Pernilla Ericson, Aftonbladet

Hope is still alive for our seas and ice
Håkan Wirtén and Tom Arnbom, Göteborgs-Posten

A global maritime agreement can save the oceans - but Sweden is passive
Dima Litvinov and Parul Sharma, OmVärlden

"If you go to Israel, it is important to see the whole"
Anna Tibblin, Svt Opinion