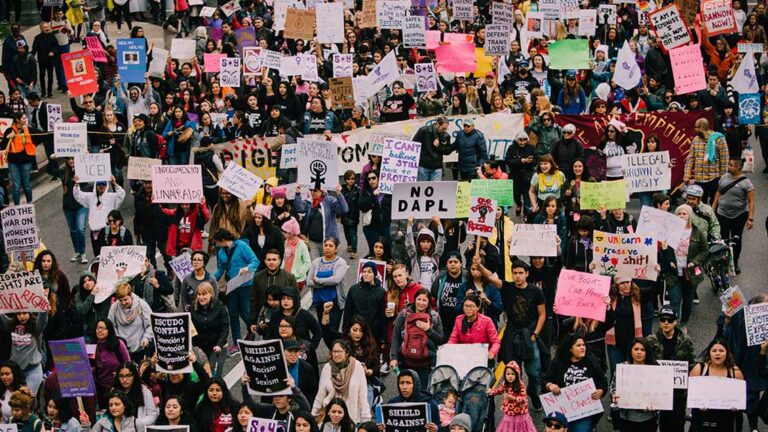 Historical feminist victories that have taken generations to achieve are in danger of being lost. The scope for civil society, and in particular the women's movement, to organize and demand their rights risks shrinking - even in democracies such as Sweden. FUF-bladet meets influence and policy adviser Charlotte Pruth at Kvinna till Kvinna to discuss the conditions for power for the global women's movement.

It is not uncommon to hear the shouts chanting "half the power, the whole salary" from March 8 demonstrations at home in Sweden. The question of women's power and position in society has not yet found an equal answer from those in power in what is considered one of the world's most equal countries. Charlotte Pruth describes a widespread power and willingness to come together to change the situation in all the countries where Kvinna till Kvinna works. At the same time, she points out the difficult conditions for organizing globally.

- The starting point is that progress is being made for women's rights and organization. The capacity and perseverance of the women's movement is strengthened and legislation advances. But at the same time, we are seeing how funding for gender equality is increasingly going to local national women's organizations. In a situation where local women's rights organizations are underfunded and at the same time face a shrinking space, the situation becomes vulnerable, says Charlotte Pruth.

Kvinna till Kvinna's report shows that the shrinking space for civil society organizations is a global trend and hits the women's movement extra hard. The factors that are believed to be behind this are increased nationalism and traditional values, religious fundamentalism, counter-terrorism and the fear of political change. Charlotte Pruth explains:

- In countries within the EU, it is primarily nationalism and increased nationalist rhetoric and politics that are behind it. In conflict-affected countries, women activists more often highlight strong patriarchal structures, religious fundamentalism and traditional values. They often strike in much the same way - to limit women's mobility in working life but also in civil society. When we did the report, we saw that there are differences, but they are smaller than we thought. As nationalist movements grow, a natural part of restricting women's freedom of movement is to use women's gender identity as a way of attacking her. That is why we have now launched a call, #kvinnorsval, to call on the incoming Prime Minister to take a stand against all forms of nationalism after the elections in September.

The shrinking space is usually about a conflict-filled relationship between the state and civil society. Strong democracies are based on the will of the people and thus the relationship is characterized by mutual dependence and cooperation. Something that has become increasingly common in less democratic contexts is that the relationship is instead manipulative: in addition to methods of exclusion, the resourceful party manipulates the other party to accept its strategies and approaches. In many cases, organizations that are expected to represent civil society are linked to power and thus lose their neutrality and their ability to criticize the ruling regime.

Women do not yet have half the power - neither in Sweden, the EU nor conflict-affected countries. In the report, 123 voices from different parts of the world testify to both the shrinking space for women to enjoy power, but also an active struggle for increased equality - despite horrific consequences with danger to life. Without the civilian space for organization, the women's movement has no or few arenas to fight for women's rights, Pruth says:

- The women's movement must push for gender equality issues in order for them to be noticed, it is in the patriarchal structure that these issues are raised only when the women's movement raises them. We know, and so does research, that a strong feminist women's movement is the single most important factor in advancing women's rights. Charlotte Pruth concludes the conversation with how we can respond that the methods of the oppressive states have become more strategic and sophisticated, for example as lobbyists at UN level. Several countries have jointly pushed through UN resolutions aimed at strengthening the family as an institution and interpreting human rights on the basis of traditional values.

- It is important that women's organizations and women's activists from different countries meet because then they see how similar their situations are. In the same way that governments copy repressive legislation from each other, the women's movement and civil society must also learn strategies from each other and mobilize regionally or internationally.