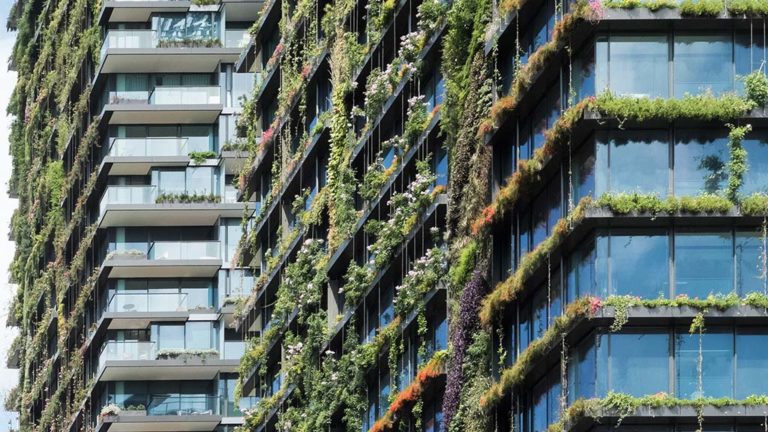 The high-rise One central park function with its plant-covered façade as a vertical park in Sydney. The plants also help protect the apartments from sunlight during the summer months. Picture by Hans Veneman.

Through urban cultivation, people in cities can get locally grown food at the same time as it contributes to green cities and creates community among the inhabitants. According to the Food and Agriculture Organization of the United Nations (FAO), an area of ​​only one square meter can provide up to 20 kilos of food.

It is a cloudy day in October when I visit some city farms in Malmö. Even though it is the wrong season for plants, there is still plenty of greenery in the flower beds. Mint, lavender and lemon balm are crowded in the cultivation outside Yallatrappan, which is a result of the cultivation network Odla i stan. The project has primarily created social sustainability because the plantations create a meeting place for the residents of Rosengård. The farms also contribute with green areas and give children and young people an opportunity to learn more about farming.

Outside Sweden, urban farming can be vital for food supply. In Cuba, urban agriculture became large after the collapse of the Soviet Union in 1991 because the Soviet Union was their exporter of oil and without oil it became difficult to keep large-scale farms running. The large urban cultivations in Havana still exist and urban cultivation is still conducted on a large scale. According to figures from the FAO, about 90 of Havana's residents are involved in some form of urban cultivation.

By growing their own food, people living in poverty can also have access to a much more nutritious diet. Because cheap food often does not have a nutritious content, people can get a more varied diet through urban cultivation, which leads to better health. In Tanzania's capital Dar es Salaam, an estimated 90 percent of all leafy vegetables come from the citysodlings, according to figures from the Swedish Society for Nature Conservation.

Urban cultivation also helps to maintain greenery in the cities, which is good for both our well-being and the environment. Through urban farming, we can also reduce the transport of food and thus cause less environmental impact. In Brussels, the grocery store Delhaize has started an urban cultivation on the roof of the store in response to consumers' increased interest in buying locally grown. Through cultivation, consumers get fresher and fresher vegetables that can be harvested and sold in the store on the same day and with less impact on the environment because no transport is required.

- Urban cultivation is a way to reduce our vulnerability in the cities and we need to use all available land in larger urban areas to cultivate. We are facing a resource crisis with a lack of energy, at the same time as the global economy is collapsing. The food chain is fragile, if we lack a link, we are without food.

Urban farming already occurs all over the world, but given the many positive effects it has on society, the proportion of food produced through urban farming needs to continue to increase. In a quest for sustainable cities, urban farming can contribute to social sustainability as well as environmentally friendly and secure food supply.