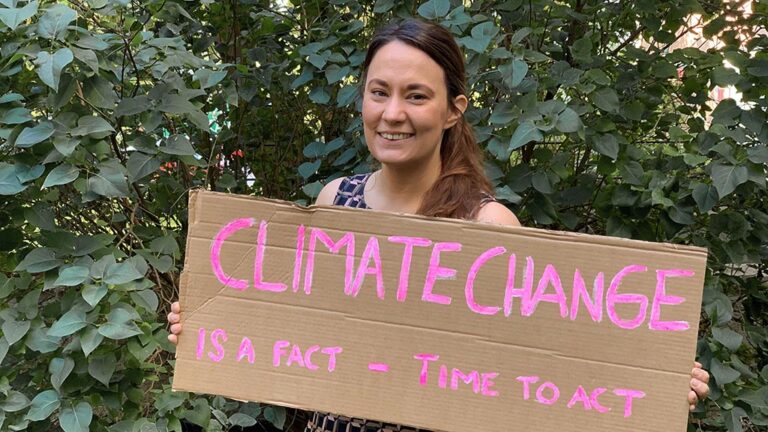 Josefin Pasanen has been acting Chancellor at FUF since August.

This week, millions of people in over 150 countries are demonstrating for the climate. FUF stands behind the global climate strike and today participates in Stockholm.
- We must listen to science and protect the future of people all over our planet, says FUF's Chancellor Josefin Pasanen.

The research speaks for itself. If we do not do something about climate change now, it will have fatal consequences. The UN's climate panel The IPCC's new report is based on almost 7000 published scientific studies that show that oceans are rising and becoming both warmer and more acidic, while glaciers are melting and permafrost is thawing.

All of this will have devastating consequences for people around the world. It will be more difficult to access food and clean water. And it will become increasingly common with natural disasters such as hurricanes, extreme heat waves, floods and droughts.

- We must take this knowledge seriously. Neither those in power nor individuals can continue to ignore the facts. Ecosystems are disturbed and human suffering risks becoming very large as a result of climate change, says FUF's Chancellor Josefin Pasanen.

FUF works for a fact-based debate and increased knowledge about global development and Sweden's role in the world. In that context, the climate has an obvious place.

- When it comes to climate issues, it is obvious that we in Sweden can not shield ourselves from the rest of the world. The emissions we cause here create problems for people all over our planet, and our consumption patterns cause emissions worldwide, says Josefin Pasanen.

In the 17 global goals for sustainable development - adopted by the countries of the world in the UN - goal 13 is about combating climate change. But without tackling that goal, the other goals will not be achieved either.

- The global goals are connected. If we do not take responsibility for the climate, we will not achieve positive global development in other areas. Poverty, hunger, gender equality and much more are linked to the climate, says Josefin Pasanen.