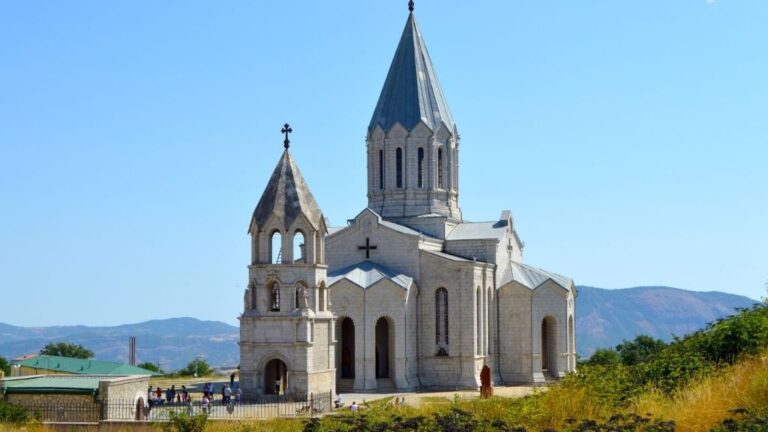 The status of the Nagorno-Karabakh enclave, which is inhabited by Armenians but lies within the borders of Azerbaijan, is the basis of the war that raged for six weeks in the autumn of 2020. The war, which claimed thousands of lives, generated increased involvement of regional players - more precisely Turkey and Russia.

The enclave, which demands independence, is backed by Armenia, while the militarily stronger Azerbaijan is backed by Turkey. Russia, which also has strategic interests in the region, managed after several attempts to negotiate a ceasefire and now has peacekeeping forces in place.

Although the ceasefire generally seems to hold, several minor violations have taken place. The outposts at the borders have shelled each other at several occasions, something that the two sides accuse each other of. Despite the ceasefire, the status of Nagorno-Karabakh remains unclear, and the parties are adhering to their demands for the right to the area.

But there is some hope that the parties can agree on other points, for example by building roads to increase the connections in the region. The Russian forces in Karabakh make it unlikely that any of the parties would escalate the situation to a full-scale war. But the core issue, that is, the political status of Nagorno-Karabakh, remains unresolved.

- In theory, it should be possible to start turning the page now, especially if some of the economic activities, projects, jobs and road connections can be restored. The problem is that Azerbaijan has been trying to consolidate its advantage since the ceasefire, says Thomas de Waal, analyst and author of the global think tank Carnegie Europe.

The two countries stand by their positions on the issue. But as soon as one scratches the surface of the conflict, which at first glance seems to be about demarcations and the right to independence, a network of historical stories of genocide, expulsions and war crimes emerges.

The memories of the Armenian genocide of 1915 are still an open wound torn by Azerbaijan's close relationship with Turkey. Tensions in the area that bubbled beneath the surface during the Soviet era boiled over when the countries became independent in the 90s and a full-scale war broke out. During this war, the distribution of power looked different. Hundreds of thousands of Azerbaijanis was expelled from their homes when the Armenians took over the whole of Nagorno-Karabakh as well as seven other nearby areas. When the war ended in 1994, the civilian population on both sides had been subjected to massacres.

But behind the atrocities that have been committed throughout history, there are also examples of when the two nationalities coexisted. Karabakh was inhabited by both Azerbaijanis and Armenians during the Soviet era, although the Armenians were in majority. But the traumas that got in the way of the harsh tone of the public discourse have made reconciliation harder to reach.

The conflict has come between the two nationalities, and closed borders limit the contact between them.

- They have often competed for the same territory, the same resources. They have unfinished national projects. Politics has made them hostile to each other, they say Waal.

Laurence Broers, author and expert on conflicts in the South Caucasus, also sees how the political agenda, one-sided stories and experiences of full-scale war have shaped people's perceptions of the situation.

"Young people, for example, I do not think have these memories of coexistence, and have been brought up with these heavy, very ideological stories about history," he says.

So what does the future hold for the conflict? There are signs that talks between the parties are increasing - the countries' foreign ministers met in October to discuss the conflict, and there are hopes of increasing road connections and exchanging more prisoners of war. But both de Waal and Broers see a long way to go to reach a peace agreement.

"Armenia still feels traumatized, besieged, and there is no real capacity in Armenia to turn the page," said de Waal.

Broers believes that we will see the current situation continue.

- Overall, I do not think we are on the verge of a real peace agreement. I think we will continue this situation for several years where we have a kind of managed instability, with recurring crises but no comprehensive peace agreement in place, he says.