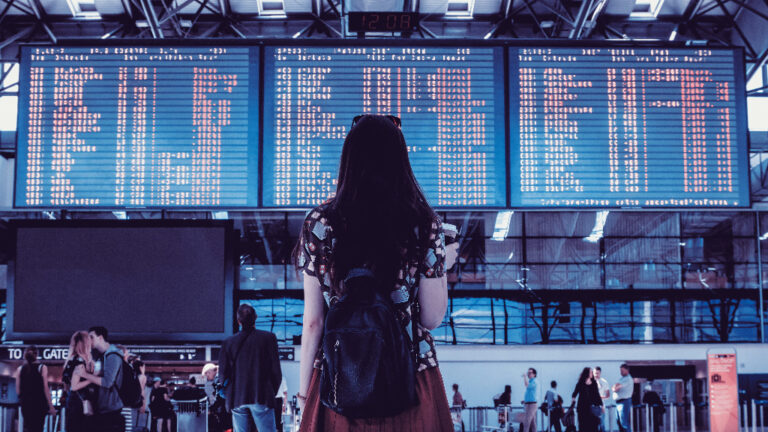 To fly or not to fly, that is the question. Source: Piqsels

That countries and companies compensate for climate change is positive for the environment. But the approach also meets with criticism, some believe that the compensation will be a kind of indulgence letter that justifies an already too high consumption. According to Eva Lövbrand, assistant professor at Linköping University, climate compensation is not enough to achieve the goals within the Paris Agreement - drastic reductions in emissions are also required.

Today it is It is common to compensate for carbon dioxide emissions by paying for the corresponding emission reduction elsewhere in the world. One dark and late afternoon in November, Utvecklingsmagasinet had the opportunity to interview Eva Lövbrand, assistant professor at Linköping University, about the advantages and disadvantages of climate compensation. Lövbrand is active at the university Center for Climate Policy Research (CSPR).

- The positive thing about climate compensation is that the projects can channel money and opportunities to the developing countries to make a fossil-free transition, resources that might not have benefited them otherwise, Lövbrand explains. But, she continues, there is a dilemma. The question is whether we in the western world can really credit ourselves with the benefit compared to how we consume?

Of course, it is positive to contribute to an improved climate through compensation. The transition to fossil-free energy and increased tree plantations is absolutely necessary for the planet's long-term survival, but in order to maintain a good standard of living worldwide, these projects must be combined with reduced total emissions. A common way of compensating for climate change is to contribute to projects in developing countries, such as tree planting or replacing coal power with fossil-free energy sources. There are also local projects that deal with climate compensation, for example one program in Nepal which equips homes with energy efficient stoves. The stoves can have several positive effects: in addition to not emitting toxic gases, they create jobs and reduce deforestation.

Difficult to choose the right in the compensation jungle

There are several objections to climate compensation. For the uninitiated, it is a challenge to understand which projects are the best, or even which are suitable, to choose. Many projects have been criticized and questioned. Some examples are forest plantations that have driven landowners away from their crops or plantations that have been devastated after only a few years. Some projects have also been double-counted so that the climate benefits have been reported both in the country that has financed the investment and in the country where the project was implemented.

Consumers are in the hands of the companies that market the services for climate compensation. The Swedish Consumer Agency's investigation on climate compensation states that "the marketing of climate compensation and climate-compensated products is usually relatively economical, difficult to control and designed as a targeted message". Messages that the report addresses as examples of this are "Our entire business is climate neutral" and "Climate compensation is today the most cost-effective way to take full responsibility for its climate impact".

Today, most certifications are offered to guide consumers. Gold Standard is trusted by 80 environmental movements in the world, including the World Wide Fund for Nature and Greenpeace. Gold Standard guarantees that the money leads to emission reductions and that the development projects would not have been carried out anyway. It also includes social guarantees that the compensation will lead to reduced poverty and improved health. Living Plan is another example of a standard that has been developed for forest projects and aims to involve the local population.

Our emissions must be drastically reduced

Private individuals risk getting the impression that climate compensation balances the extra emissions that consumption creates and that it is therefore okay to consume. To compensate for a flight between Sweden and Spain costs between 60-400 SEK depending on which compensation standard is chosen. A small amount for many Swedes to justify a behavior that is bad for the climate when the very best thing would have been not to cause any emissions at all.

- Climate compensation was introduced at a time when we thought we had time. Now we know that we do not have time, emissions must be dramatically reduced for it to be possible to reach the levels of the Paris Agreement, says Lövbrand.

According to Lövbrand, we must question whether we should continue to consume and transport ourselves in the way we do today. She believes that we need both the improvements we compensate for and reduced consumption.

- In the Paris Agreement, the developing countries also commit to reducing their emissions, and if we buy up their opportunities, reap the low-hanging fruit, it can be challenging for them to find other ways to fulfill their commitments, says Lövbrand.

What does the future hold?

Lövbrand is clear in his arguments about the future. She believes that we are facing a structural adjustment where the high-income countries, which emit the most greenhouse gases, have the responsibility to take the lead. According to her, these countries need to get their citizens on a journey towards a fossil-free society and think new about how we consume. In fact, this should be a much more important issue for the consumer than the issue of compensation for individual emissions. We Swedes need to think more broadly than just seeing ourselves as consumers - we are also citizens.

- There is a great symbolic value in showing that we can reduce emissions and maintain welfare at the same time, Lövbrand concludes.

Climate compensation means that those who give rise to increased greenhouse gases compensate by paying for an activity that reduces the corresponding amount of emissions. The greenhouse gases are mixed into the atmosphere and this means that no matter where on earth they are emitted, they affect the whole atmosphere. This allows you to consume in one place and compensate in another. The idea of ​​climate compensation is already found in the 1997 Kyoto Protocol, where countries pledged to pay for climate improvement projects in developing countries or at home. Later, it also became possible for companies and individuals to buy the emission credits. Today, many companies offer climate compensation for the carbon dioxide emissions they cause.