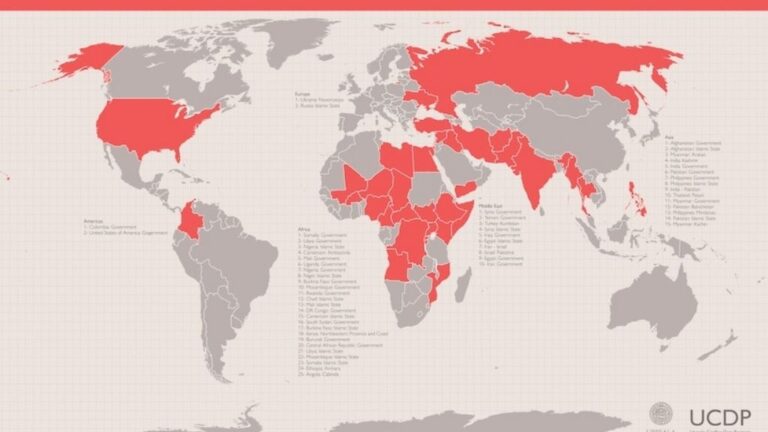 More than fifty armed conflicts are currently taking place around the world, mainly in the Middle East and Africa. - The number of people who die in war has decreased, but at the same time many refugees cannot return to their home countries, says Peter Wallensteen, peace and conflict researcher.

Peter Wallensteen, peace and conflict researcher and senior professor at Uppsala University, has this autumn been fully prepared for the celebration of the UN's 75th anniversary. In addition to teaching at Uppsala University, Wallensteen also works with the program Uppsala Conflict Data Program (UCDP), which he has co-founded. UCDP is a database that compiles and analyzes data regarding the world's conflicts and its mortality. The program also compiles changes over time; in this way can Wallensteen and other researchers see how different conflicts develop globally.

The number of armed conflicts in the last five years has been around 50 per year, according to UCDP statistics. Areas with particularly many ongoing conflicts are the Middle East and parts of Africa. The civil war in Syria is central and has significantly affected the data collected, according to Wallensteen.

- Some wars are now at a lower level and the number of dead has thus decreased, but at the same time refugees have not been able to return, Wallensteen says.

State-based violence like that in Syria creates the most deadly conflicts in the world, Wallensteen says. On the other hand, high death rates are also seen in areas where criminal groups have a foothold, for example in Mexico.

Wallensteen implies that in recent years no new peace agreements have been signed, despite a high level of conflict. The latest comprehensive peace agreement was signed in Colombia four years ago and was then awarded Nobel Peace Prize. The ongoing pandemic is also hampering peace work in several countries.

- The pandemic has made communication between the parties to the conflicts more difficult. In addition, some groups have the opportunity to make military advances now that the states are weakened.

The UN calls for a ceasefire

In March, UN Secretary-General Antonio Guterre called on the warring parties to conclude a ceasefire in order to meet and deal with the virus together. However, his call has had only a limited impact. It took the UN Security Council many months to agree on a text that supported the call for a ceasefire, which shows the difficulties in getting cooperation between the great powers, Wallensteen says.

Peaceful and inclusive societies is one of the global goals in Agenda 2030. The goal describes how everyone should have the right to live freely without violence and that peace is required to be able to achieve other goals. Wallensteen agrees that peace is fundamental, but believes that the definition needs to be discussed because peace also needs to be sustainable.

- Peace that includes respect for human rights provides the conditions for human security and hope for the future, which creates the best conditions for a lasting peace, Wallensteen explains.

Wallensteen highlights the UN's work on peace agreements and preventive diplomacy as particularly effective efforts. This is shown in the UCDP's data where the number of armed conflicts during the 1990s decreased from about 50 per year to, at least, about 30 in the early 2000s. On the other hand, strong support from the Security Council is needed for the UN Secretary-General and the General Assembly to be able to conduct negotiations.

Sweden has an important role in peace processes

Sweden has tried to find constructive ways to improve the negotiating climate in connection with conflicts, describes Wallensteen. He gives an example of a peaceful solution to a situation in West African Gambia in January 2017, where prevention worked to stop the conflict before it became too violent and difficult to resolve. The Yemen Agreement in December 2018 is another political agreement where Sweden's role has been significant in trying to stop one of the most devastating wars going on right now.

- Most lasting is perhaps a completely different effort from Sweden, one of a more normative nature: to be a strong advocate for issues concerning women, peace and security, Wallensteen concludes.