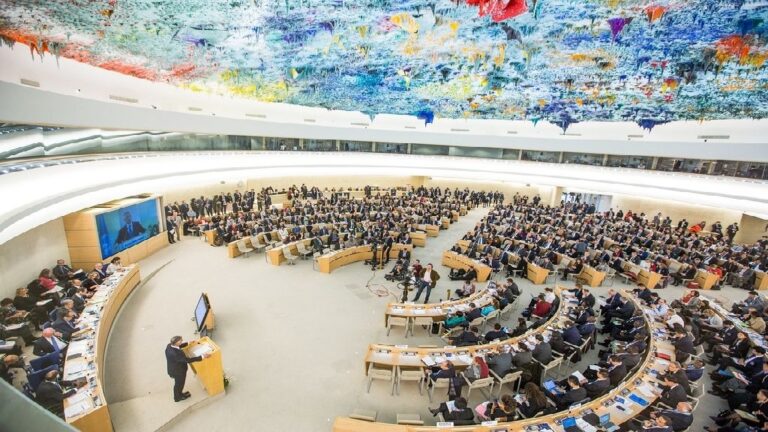 The UN Human Rights Council in Geneva voted in favor of a new human right in the autumn - the right to a healthy environment. Photo: Elma Okic. Source: Flickr.

The right to a healthy environment was voted through in the UN Human Rights Council in Geneva on October 8 - and the world now has a new human right. This right strengthens the link between climate and human rights, something that UN experts believe is important as we live in a world with increasing climate-related issues, such as desertification and large-scale oil projects.

- The future of the world looks a little brighter today.

The right is based on strengthening climate legislation and offering support and protection to, among others, indigenous peoples and environmental defenders. The resolution was voted through by a clear majority - 42 to 1. Countries that chose to abstain were some of the world's major nations - Russia, China, Eritrea and India .

Måns Molander, Nordic head of Human Rights Watch, believes that this will have no effect on the whole as the right has nevertheless been universally recognized. Despite the countries' distancing themselves, the right can be used on a universal level in, for example, UN bodies. According to Måns Molander, many countries were long hesitant to recognize the right. Sweden, together with Norway, Finland and Denmark, have all been hesitant, partly because they believe that the drafting of a new international law right was considered a cumbersome process and they prefer a more inclusive process in which all countries are more involved.

The fact that the UN Human Rights Council recognizes a healthy environment as part of securing a better future is in many respects a step in the right direction, according to both activists and human rights organizations. Climate experts point out, however, that the right has limitations as it is not a legally binding one right.

Despite the limitations of the right, it is far from meaningless. Måns Molander believes that even if a resolution of this kind is not legally binding from the outset, it is the starting point for the resolution to eventually have the opportunity to develop into a convention - and then become legally binding if states declare themselves bound by it. Although the right is not binding, it puts greater pressure on nations to implement the right in their own legislation.

David R. Boyd says that the resolution can make the work for a sustainable future more effectively, the quality of the environment we live in has reached a minimum. More than 100 countries have implemented a healthy environment in their national constitutions in the past, and this universal recognition puts pressure on other countries to do the same and to strengthen the protection of a healthy environment.

Hunger, climate change and forced relocations affect millions of people every year and pose a threat to the resolution. Through the decision on a healthy environment, the Human Rights Council has been able to strengthen the protection of human rights. The fact that people can be violated through climate change through, among other things, forced relocations has now been recognized by the UN Council. It is a right that has been debated for decades - both within and outside the UN, it has been advocated for the development of this right and it has now been gladly received.

The increased support the new right provides, among other things, for environmental defenders is important as they are often exposed to danger and threats. Hundreds of environmentalists are murdered every year and in recent years the proportion of murdered has increased.

- Environmental defenders are the most vulnerable in the whole world as they have powerful forces against them both states and large companies. Defending land and nature rights has been found to be the most dangerous task you can have as a rights activist, says Måns Molander.

He says that environmental activists need all the support they can get, both financially, socially and legally. With this right, they get legal support. According to UNEP, indigenous peoples are also under great threat, even though they already have special rights. With the new right, indigenous peoples receive extra protection as a clean and healthy environment has been recognized as important to maintain, which to a certain extent ensures that indigenous peoples Home.

Although about 80 percent of UN member states have previously recognized the importance of a healthy environment through, among other things, national laws, this right is considered by the UN to be an important step in reducing the risk of a worse climate crisis and greater losses of biological diversity, this as the right has now been recognized at the universal level. The right places a heavier responsibility on states to work both individually and together with other states to promote the environment.

Despite the fact that the right faces challenges, it is a right that is considered to have great potential. When it was recognized, it was made clear what power civil society can have, as civil society has long called for this resolution.

Going forward, it is important to transform the right into a national rule and get all countries to stand behind it at the national level, says Måns Molander.

Policies also need to be adopted in order to know concretely how to work for the resolution and for it to have as great a positive impact as possible. Despite the fact that not all countries recognized the right, it still applies to all people everywhere, regardless of status. It will be an important right for climate refugees and forcibly displaced persons as they now have stronger legal support thanks to the right to a healthy environment.

The recognition of a healthy environment on a universal level made many people want it like that. Going forward, the UN Human Rights Council hopes that the UN General Assembly and the Council of Europe will also recognize the right. In that case, it can be an even more effective tool for challenging states and companies to do more to protect the environment.