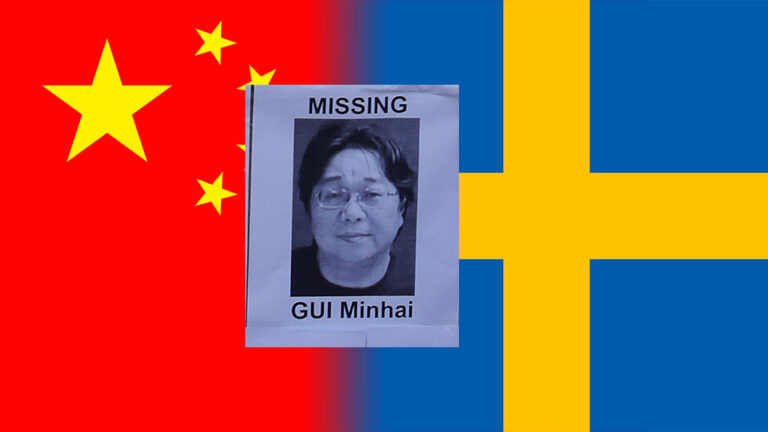 The Swedish publisher Gui Minhai was convicted this week for providing foreign actors with secret information. Debaters and lead writers agree that the verdict is not credible.

"Gui Minhai's real crime was that in Hong Kong he published regime - critical literature and published information on the corruption of communist leaders. It was not appreciated by those in power in Beijing and the verdict is their revenge, "writes Anders Lindberg in Aftonbladet.

DN's editorial staff writes that since Gui Minhai was first arrested in 2015, everything has happened in secret. In their leader, they put both "convicted" and "court" in quotation marks.

China claims that Gui Minhai voluntarily renounced his Swedish citizenship. Expressen's editorial staff writes that, just like the verdict, these are fabricated accusations. They further write that if the roles had been reversed, China would have responded by expelling the Swedish ambassador. But Sweden must think long-term and can not crash its diplomatic relations with China, writes Expressen.

In this context, Sweden is a small world player, which is why DN's editorial board emphasizes the importance of the EU raising its voice. Gui Minhai is not only a Swedish citizen, but also an EU citizen.

"The recent President Ursula von der Leyen has promised that her EU Commission will be 'geopolitical', that is, that the EU will use its strength in the world arena. But when, if not now? ”, Writes DN's editorial staff.

Since 2011, 380 people have died in the war in Syria and half of the country's population has been forced to flee. Sydsvenskan's editorial board believes that the outside world is closing its eyes to a brutal humanitarian catastrophe that is only continuing.

"This hell has been going on for nine years now. But the world no longer talks so much about the bloody proxy war, the war through agents fought between Russia, al-Qaeda, the United States, rebel forces, dictator Bashar al-Assad's army, Iran, IS terrorists and Turkey. It is complicated and nasty, "writes Sydsvenskan's editorial staff.

The Swedish Foreign Minister Ann Linde, together with 13 other European foreign ministers, calls on DN Debatt the Syrian regime, and those who support it, to end the offensive in Idlib and to live up to their obligations under humanitarian law. Ministers want to see a restored ceasefire in the region.

The trial of Gui - a tragic farce
The editorial staff, Dagens Nyheter

In the shadow of censorship, uncertainty is spreading about both the epidemic and the economy
The editorial staff, Dagens Nyheter

Rather a straight course towards China than big gestures
The editorial staff, Expressen

Sweden should not be China's kitten
Lydia Wålsten, Svenska Dagbladet

Sweden must unite the outside world against China
Ulf Kristersson and Hans Wallmark, Expressen

The EU must raise its voice on Gui Minhai - when else?
The editorial staff, Dagens Nyheter

The crisis in Syria

Hell in Syria is also our thing
Editorial board, Sydsvenskan