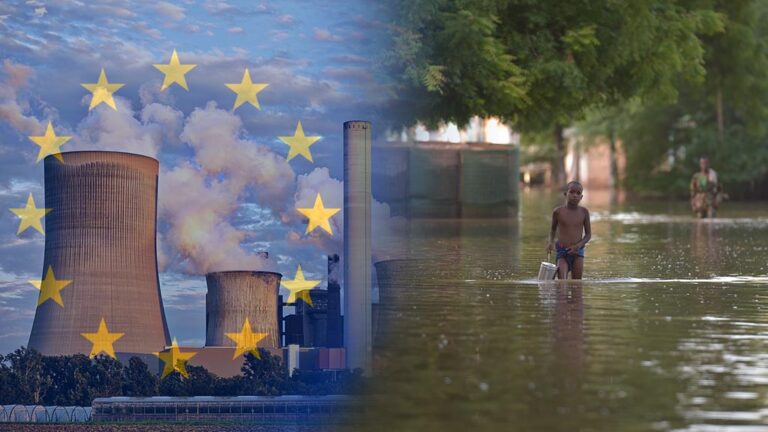 Despite the fact that the EU accounts for a large part of climate emissions, it is poor countries and people who are hardest hit by climate change, writes Malte Roos.

The EU has long been of great benefit to the Member States and their development. Now the EU must also look to the outside world and prioritize global justice over its own economic and security interests. It writes Malte Roos who is running for the European Parliament for the Green Party.

Ever since its inception, the European Union has been a key player in promoting the development and equalization of disparities between the European countries involved in the project. But while the EU has been an important positive instrument for promoting the interests of the Member States, that work has all too often been done at the expense of the economic and political interests of people and countries in the poorer regions of the world. That must change.

If the world is to be able to eradicate extreme poverty and reduce all poverty by at least 2030% by 50 - as promised in the Global Goals for Sustainable Development - the EU needs to take greater global responsibility in the coming term to promote sustainable development worldwide. . The EU must simply prioritize global justice and solidarity with the world's vulnerable above its own economic and security interests. This requires political reform in mainly four areas.

1. Climate policy. Climate change has historically been caused mainly by production and consumption in the world's rich countries, but mainly affects those countries and people who cannot afford to protect themselves and their societies. This makes it one of the most central justice issues today, and places demands on the EU to push for ambitious and rapid emission reductions. The EU should introduce an emissions budget that forces all Member States to reduce emissions by 10-15% each year, while continuing to drive up carbon dioxide prices to make environmental degradation economically unprofitable.

2. Migration policy. The EU has long made it difficult to immigrate to Europe from the Global South, whether migrants are refugees or labor migrants, forcing many migrants to increasingly dangerous routes. At the same time, migration is one of the most effective ways to lift people out of poverty, and can also benefit the recipient countries that receive much-needed labor. The EU must create more safe and legal routes for refugees to travel to Europe to seek asylum, and develop better systems for economic migrants to immigrate to work and work under good conditions.

3. Trade policy. International trade is one of the best instruments for strengthening a country's economy and creating the conditions for lifting people and societies out of poverty. Unfortunately, European trade agreements with countries in the Global South have tended to include clauses that benefit large multinational companies and buyers in Europe at the expense of environmental legislation and workers' conditions. Truly effective and mutually beneficial international trade requires fair trade agreements between the EU and the rest of the world. In negotiations on future trade agreements, the EU will continue to dismantle trade barriers, while safeguarding fair conditions and the sustainable use of natural resources and opening up transparency in the negotiations.

4. Development aid policy. As one of the world's largest economies, the EU has the potential to be one of the best donors. Despite this, EU aid amounts to well below 0.7% of gross national income, and too much of the aid money goes to projects to prevent refugees from entering Europe. Neither poverty reduction, gender equality nor climate change are priority areas for EU aid policy. In the coming term of office, development aid policy needs to be fundamentally reformed so that it is based on the Paris Agreement, Agenda 2030 and international human rights conventions.

A green and progressive EU can be a force for justice and solidarity in an uncertain world. But then it requires a European Parliament full of environmentalists who are fighting to make that policy a reality.