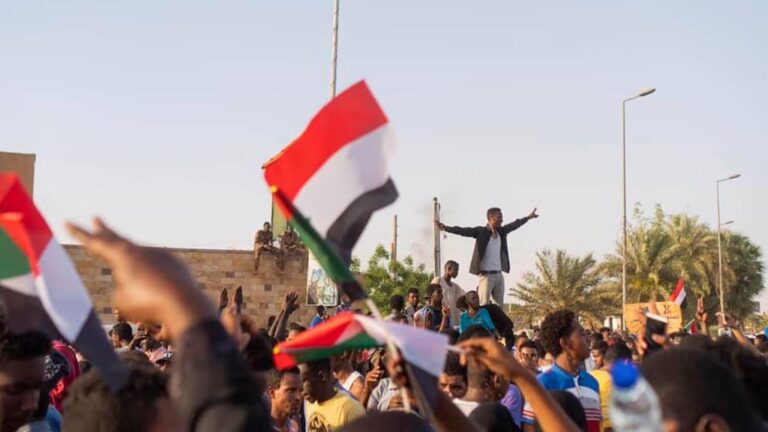 Over the past year, there have been many demonstrations in Sudan. One of them was turned into a massacre when more than 100 protesters were killed. Photo: M Saleh (CC BY-SA 4.0)

The people's revolution in Sudan was taken over by the military this spring and led to a massacre. Activists in the region believe that the EU has provided support to the perpetrators through an aid fund set up to control migration in Europe.

On June 3 this year, Sudanese paramilitaries stormed a demonstration in the capital Khartoum, killing more than 100 civilians. More than 700 were injured and more than 70 rapes were reported in connection with the massacre. Several bodies were dumped in the Nile in an attempt to cover up the attack. Sudan has been led by a military transitional government (TMC) since April 11 this year, when dictator Omar Al-Bashir was ousted in a military coup after 30 years in power.

The coup followed a year of popular protests against Bashir. The demonstrations began when prices of ordinary household goods were raised, but the price increase was just the spark that ignited the fire. The dissatisfaction with Bashir's government and the economic conditions were already there.

The demonstrations were driven by the population, mainly women's rights and youth organizations, but it was the military that removed Bashir from power and imprisoned him. After the coup, the military announced that it would act as a transitional government for two years. They also introduced a state of emergency, repealed the constitution and imposed a curfew.

The leader of the transitional government TMC is Abdel Fattah al-Burhan, but in reality the government is led by vice leader Mohamed Hamdan Dagalo, better known as Hemeti. Hemeti led the government-backed and very violent Janjaweed militia during the Darfur conflict. He also started the Rapid Support Forces (RSF) paramilitary force consisting of Janjaweed members.

Sudan is a transit country for many migrants from neighboring countries and therefore a recipient of the EU Emergency Trust Fund for Africa (EUTF for Africa). The Development Assistance Fund was established after the influx of refugees to Europe in 2015 to “address the sources of irregular migration and destabilization in Africa”. Sweden contributed EUR 3 million to this fund and sits on the fund's board.

- It seems that all principles, values ​​and objectives for development assistance are thrown overboard when the EU prioritises preventing refugees and migrants from coming to the EU, says Magnus Walan, policy adviser at Diakonia.

Through the EUTF for Africa, EUR 217 million goes to Sudan, of which EUR 13 million is earmarked for various migration management projects. According to scientists Some of this money has gone to Hemeti and the RSF militia, which has stopped migrants at Sudan's border with Libya. The militia has been criticized by, among others, Human Rights Watch, for its violent methods.

The EU responded to the criticism by not providing funds to the Sudanese government but to partners such as civil society organizations, NGOs and international organizations in place in Sudan. A spokesman for the European Commission said that neither the transitional government nor the RSF militia would receive any EU money.

However, the Better Migration Management project, funded by the EUTF for Africa, paints a different picture. IN the project description states that the aim of the project is to "support the national authorities in the management of migrant smuggling and human trafficking within and from the Horn of Africa". Hemeti has also said that the EU "is losing millions in the fight against migration, that is why they must support us".

However, Better Migration Management addresses RSF as a risk factor and that the project in Sudan will prevent funding of both RSF and state corruption. But activists in the region say the EU has funded and supported the militia. They describe it in an open letter to the President of the European Commission, Donald Tusk.

At the same time, the project descriptions show that the EU has prioritized migration management, well aware that the money can go to finance violent groups.

- The EU is aware of the complexity, but despite that, they are still working on these projects, says Madeleine Winqvist, advisor and coordinator for EU funding at Concord Sweden.