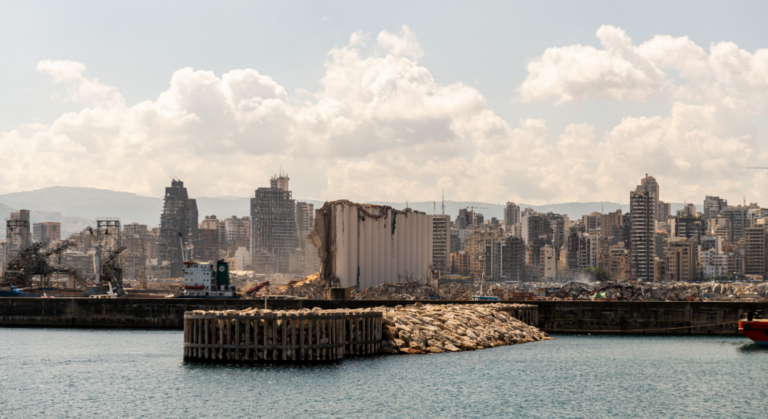 A massive explosion occurred in Beirut on Friday in the Tariq al-Jadida area. Four people died and about 30 were injured. It is still unclear what caused the explosion, according to Aljazeera. Beirut has been hit by several explosions recently. It was in early August that a warehouse near Beirut's grain silos caught fire and exploded. More than 7,000 people were injured and nearly 200 people died in the explosions. Large parts of Beirut around the port were destroyed and caused by 2,750 tonnes of ammonium nitrate stored in a port warehouse.

The location of the chemicals in the port of Beirut has been talked about all over the world and has its roots in the "lawless world" of international shipping and trade, according to researcher Laleh Khalili from Queen Mary University in London. The fact that most of Lebanon's political leaders knew and were warned a month before in July about the placement of the chemicals in the porthas aroused strong feelings in the country.

Six days after the explosions in the port of Beirut, the government resigned due to anger aroused by the regime, led by Prime Minister Hassan Diab. In August, Mustafa Adib was instructed by a large majority of parliament to try to form a new government. However, Adib has not managed to find a political solution and at the end of September the government ended up in a deadlock again.

French President Emmanuel Macron has criticized Lebanon's political actors, mainly the two major Shia parties, Hezbollah and Amal, for their inability to form a government after the port explosions. Macron has also stated that sanctions against Lebanon may be relevant, but that it is not appropriate at this stage.

At the same time, Macron has pressured Lebanese politicians and those in power to form a 'technocrat government' consisting of politically independent experts to resolve Lebanon's financial and political crisis.

Macron's mediation has been noted as positive from some quarters, while others see the mediation as one form of neo-colonialism. "Lebanon was under French rule from 1920 to 1946. Hezbollah's leader, Hassan Nasrallah, has stated that he welcomes France's help in trying to resolve the crisis but does not mean that Macron can."act as the ruler of the land ”.

At the same time, Macron has accused Hezbollah and Amal of sabotaging the work of forming a government demanding that the Ministry of Finance be run by a Shia Muslim. Lebanon's political power-sharing system, called confessionalism (a division of power along religious and denominational lines), has previously also been accused of being an obstacle in the way of political change in the country.

The situation with Covid-19 in the country has also worsened. The number of cases has increased since August and now stands at 52,558 cases (October 12) and 455 deaths. The Minister of Health, Hamad Hassan, proposed a total 'lockdown' on September 20 as a measure to stop the increases after the country had received 1,006 new cases in just one day, the third record day in a row of confirmed virus cases. The explosions and Covid-19 have exacerbated the already difficult economic situation. The country is now in the worst economic crisis the country has seen in modern times.

The Lebanese lira has lost 80 percent of its value against the dollar since October last year. Since December 2019, the country's financial institutions have frozen individuals' bank accounts, which has led to Lebanese not having free access to their own savings. Lebanon has had a fixed exchange rate (´pegged´) against the US dollar since 1997, which is common among many developing and low-income countries.

The reasons for Lebanon's weak economy are complex but acts in part on the absence of industrial production and agriculture. Lebanon currently imports about 80-90 percent of the country it consumes, which has led to a constant trade deficit since the end of the 2000s. A large part of Lebanon's GDP is remittances (transfers) from wealthy Lebanese abroad who send money back to their families in Lebanon. These remittances have slowed down over the past decade. According to Forbes' 2020 analysis, there are six billionaires in Lebanon, a country with an estimated population of less than five million.

"Lebanon has one of the highest concentrations of billionaires in the world," said Vladimir Hlasny, an economist at ESCWA, the United Nations' Economic and Social Commission for West Asia. Financial Times.

Politics and government in Lebanon

Lebanon's unique form of government is a consequence of the fifteen-year civil war in 1975-1990. The war divided and destroyed the country and In 1989, the Taif Agreement was signed on by all parties which marked the end of the conflict. The treaty specified Lebanon's future system of power sharing, where seats in parliament would be allocated along religious and sectarian lines.

128 seats in parliament today are evenly distributed between Christians and Muslims. According to the agreement, the president will be a Maronite Christian, the prime minister a Sunni Muslim and the Speaker of parliament a Shia Muslim. The agreement was intended to give marginalized groups in society more political representation and a transfer of some of the power from the Christian Maronites who had had a privileged status under French rule.

It has happened continuously protester in the country since October last year. The protests have taken a generally critical approach to the government as a whole (not to individual parties). A slogan in the protests reads: ”All of them means all of them", Indicating an antipathy towards the entire political system.