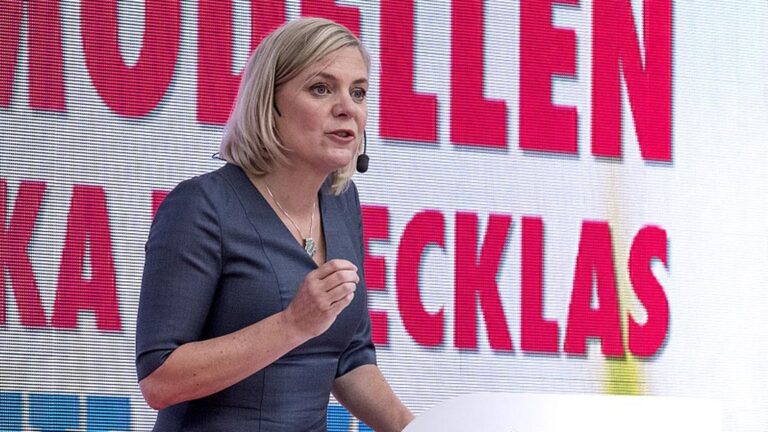 On Friday, Minister of Finance Magdalena Andersson led the Social Democrats' speech from Almedalen's big stage. The speech was consistently characterized by jobs, welfare and a fair distribution within Sweden's borders. Issues which, according to the Social Democrats, are a prerequisite for gender equality and the foundation of an equal society.

According to Magdalena Andersson, it is thanks to the Swedish model that Sweden is one of the world's most equal countries. Today, however, a global counter-offensive against these values ​​is underway. Andersson specifically mentions the right to abortion and refers to Michelle Bachelet, the UN Commissioner for Human Rights, who claims that there is an "organized offensive against gender equality and against women's rights".

The Minister of Finance criticizes parties on the Swedish right flank and believes that we should be vigilant when they try to talk about a so-called new feminism. The right - wing's new feminism is not new, but it has always been wrong, she says. Among other things, it has stood for opposition to paternity leave, special taxation and abortion, as well as opposition to the right to vote, which this year celebrates 100 years. Andersson believes that this is part of the international offensive Michelle Bachelet is talking about and that we must fight against. Among other things, she emphasizes the importance of norms and social constructions linked to gender.

She goes on to talk about the climate as a global issue of justice and equality.

- Equality and justice are not just about us living here and now. It is also about justice for our children and grandchildren, about justice across the planet. When we in the rich world waste, people in poorer countries are affected, says Magdalena Andersson.

The Minister of Finance looks back to 1972, when Sweden hosted the UN's first environmental conference. Sweden's then Prime Minister Olof Palme spoke about our common responsibility for the future. According to Magdalena Andersson, the Social Democrats - now and then - want to build a climate-smarter society in a social democratic way, a green people's home. Andersson emphasizes the importance of the green transition benefiting everyone and being a question of justice, not a class issue, and implemented in a way that has reasonable consequences for everyone. A solid challenge for the Minister of Finance and her party colleagues, both at home and internationally.

According to Andersson, however, the policy has never had better conditions for implementing a climate change. Luckily, she also believes that the greatest responsibility lies with politics rather than with the individual and his or her choices in everyday life. Let us therefore hope that the government succeeds in translating these conditions into practice. For a climate change that works, not just in every part of our country, but in every part of our earth. So that everyone can really participate.