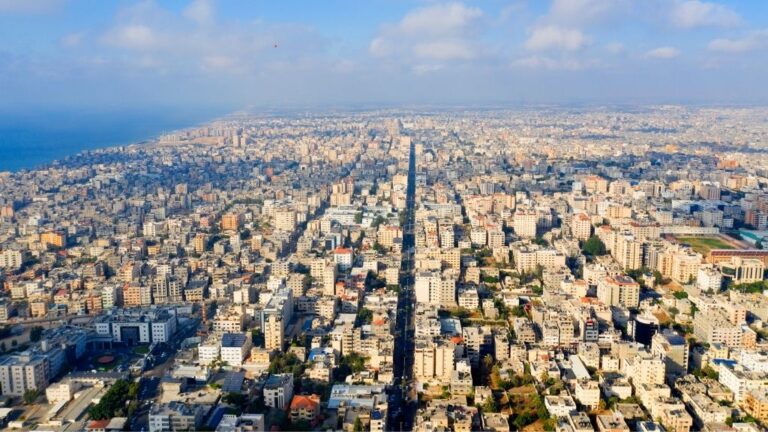 The Gaza Strip is once again in the eyes of the world and media images of collapsed buildings and people being dug out of the landslides are etching. The UN has estimated that more than 10.000 people have fled their homes in recent days. From the Gaza Strip itself, however, there is nowhere to go. Since 2, 2007 million people have been living here under siege in one of the world's most densely populated areas. To seek protection away from the massive and indiscriminate Israeli bombing is almost impossible. The Israeli blockade is maintained from land, from the air and from the sea. The border with Egypt is also usually closed. The blockade has major consequences for people's living conditions. UN agency UNCTAD reported at the end of 2020 that the blockade cost the Gaza Strip $ 16,7 billion. Unemployment was about 2020 percent in 45, poverty amounts to over 50 percent. The water supply is a disaster; there is almost no usable water.

About 65 percent of the population are registered as refugees by UNRWA. In 1948, they, their parents, or grandparents fled or were expelled from their homes in what are today the southern parts of Israel. In total, the Palestinian refugee population today amounts to 5,7 million in the Gaza Strip, the West Bank, Lebanon, Syria and Jordan. Many are still stateless and lack fundamental rights. In 1967, Gaza was occupied along with the West Bank and East Jerusalem. Gaza children are now experiencing the fourth war of aggression since 2008. Only during the night until Saturday were killed eight children in al-Shati refugee camp.

In the West Bank, geographical fragmentation has increased since the Oslo process of dividing the country into three zones where Israel still controls the majority. The expansion of settlements is eating up more and more of the territory and the road network that connects the settlements with Israel itself is separating Palestinian land and communities from each other. The wall winds its way like a snake through the landscape and is a fundamental obstacle to the free movement of people. The so-called permit regime requires special permits for Palestinians to, for example, travel from cities and villages on the West Bank to Jerusalem. Military postings constitute extensive obstacles to mobility.

Human rights organizations such as Israeli B'tselem and American Human Rights Watch has recently argued that this control system constitutes a policy of separation which must be called apartheid in accordance with Treaty of Rome of 1998. For a long time, researchers, civil society organizations, journalists and others have pointed out that the relationship between Palestine and Israel is not best described as a conflict, but as settler colonialism, that is, a process of replacing the Palestinian population with settler communities. Israeli annexation plans were announced in 2020, but in reality large parts have already been annexed.

It is therefore important that international actors look up and see the whole and the long perspective. The Palestinian population has been living under occupation for 54 years, although the occupation has changed over the years. The Palestinian refugee situation has lasted since 1948. An-Nakba, the great catastrophe and expulsion is for the Palestinians not an individual event, but an ongoing, protracted state. What began as protests against, among other things, the expulsion of Palestinian families from their homes in Sheikh Jarrah in East Jerusalem and the storming of the al-Aqsa Mosque on May 9 must be seen in the light of this situation, in the light of the occupation and Israeli policies aimed at to continued control over the majority of the West Bank, in the light of an ongoing slow-moving force.

What is particularly remarkable in the current course of events is the magnitude of the Israeli attack. Not since 2014 has such an indiscriminate and disproportionate bombing been witnessed and according to B'tselem it is already clear that war crimes committed by Israel. Hamas' rocket fire on civilians is also to be considered war crimes, but the analysis that places equal responsibility on both parties, or even legitimizes Israel's use of force with the fact that “Hamas began” must be seen as a skewed description of history.

The extent of the Palestinian resistance also indicates a new stage. The Israeli attacks on the Gaza Strip have led to massive protests in many parts of the West Bank and inside Israel itself. Perhaps with this we are beginning a new Palestinian civilian uprising, a new one intifada, where everyday resistance is channeled into more organized protests, demonstrations and confrontations with Israeli soldiers and settlers. A new generation, disappointed with the outcome of the so-called peace process and frustrated with the Palestinian Authority and Hamas, is taking matters into its own hands. What is also new is the extensive global public opinion in support of Palestine. What is also new, however, is the growing power of Israeli ultranationalism, and we have seen it clean lynch-mobbar attack Palestinians inside Israel itself. Israeli Jews have also been attacked by Israeli Palestinians in a disturbing spiral of violence. In the West Bank, settlement violence is already widespread.

What the current course of events clearly shows is that it is not possible to control a population through military occupation forever. What we see is not a conflict between two equal parties where both have equal responsibility. It is about a protracted state of constant violence, occupation and oppression channeled into settler colonialism and apartheid policies. There are really only two alternative solutions; a two-state solution or a common state for both peoples with equal rights. Continued occupation means continued and constant low-intensity violence, as history has shown on a regular basis will be punctured by more intense episodes in which Palestinian resistance intensifies and meets the military superiority of the occupying power. That's what's happening right now.