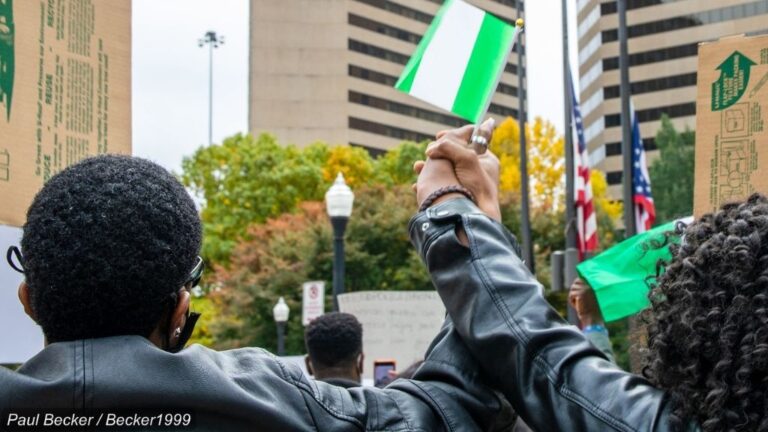 In the past month, tens of thousands of people have demonstrated in Nigeria's capital Abuja and the trade hub of Lagos. The protests go by the name EndSars and are aimed at the police unit Special Anti-Robbery Squad which has been accused of violent methods and corruption. The development magazine has talked to Leah Okenwa Emegwa, associate professor of public health science at the University of the Red Cross and originally from Nigeria, about the situation.

- You get ready to cry because very terrible things are happening in the country right now, but it has been going on for several years. The younger generation wants change, says Okenwa Emegwa.

Demonstrations in Nigeria began on October XNUMX. Then tens of thousands of Nigerians took to the streets to demand the closure of "SARS". This, in response to a video in which a young Nigerian man was shot dead by the police force. Many of the protesters have been young as a result of a large proportion of young people in the country. President Muhammadu Buhari dissolved SARS to meet protesters' demands, but formed a new special force; Special Weapons and Tactics "(SWAT)", shortly after. Buhari also deployed the military against the protesters, which escalated the violence and several deaths were reported in October.

The protests were initially peaceful. Okenwa Emegwa tells of protesters who recovered valuables found by strangers.

- The protests lasted for several weeks without violence and people gave food and drink to those who were out protesting to show their support. It only became violent when the government itself chose to send in the military. /… / This is not the first time that you promise to remove the SARS device. It's the same problem, but a new packaging.

Leah Okenwa Emegwa says that EndSars is something that involves more than stopping the specific device. The demonstrations are about dissatisfaction with inequality in health, resources and education. She talks about the country's lack of functioning infrastructure, health care and power supply. The cost of living is high and she herself usually sends money to support her siblings and friends so that they can pay hospital visits and school fees, food, rent and more.

Corrupt politicians are another problem. Okenwa Emegwa tells of a special event that fueled the already inflamed situation. At the end of October, the public was informed that there were Covid crisis packages awarded to politicians in the various Länder. They contained food and materials that would be distributed to the needy so that they could better cope with the pandemic.

- These politicians did not deliver it to the people, but these resources were locked in large warehouses. The plan was to sell these resources to the poor. The vulnerability has no significance for the elite who are doing so well, she says.

Okenwa Emegwa says that human rights are repeatedly violated in Nigeria and exemplifies this with them three media organizations that have reported on the demonstrations and been fined by the government.

- What signals does it send? It is clearly shown that one does not tolerate being criticized. It violates the freedom of the press and expression, she says.

Okenwa Emegwa does not believe that the demonstrations will lead to change unless the outside world reacts preventively.

- I hope that the outside world turns its eyes to Nigeria and decides to do something because there is a high risk of humanitarian crisis. If Europe does not want a migration crisis, then they must act and start talks and dialogue for our politicians to do something. Nigeria has a young population and it is the group that does not mind getting on an inflatable boat across the Mediterranean. Now Sweden and Europe have the chance to stop a crisis. She believes that change is possible, but believes that the situation is critical.

- We just hope that someone takes us seriously, concludes Okenwa Emegwa.

Mimmi Thor is a non-profit active at FUF as a writer.