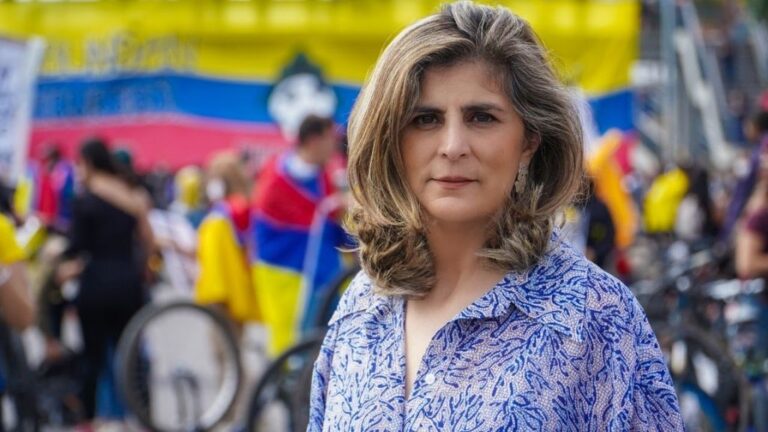 - Everything, from beginning to end we did everything differently.

It commented on a journalist in Colombia after trying to work with an experimental journalist where the report's sources are also active participants in the work process.

Laura Gil is a program consultant for the media organization International Media Supports "1325 Program", named after the UN Security Council resolution on increasing female participation and representation in peace processes. She talks about what journalists have experienced after participating in activities that will give a fairer picture of women in the media.

Today, Laura Gil sits at home and works, in Colombia's capital Bogotá. The program started in 2019 and is now running again after the pandemic paused many activities during the past year.

- The truth is that we have managed to make up for lost time, says Laura Gil.

The goal is to promote gender-conscious and conflict-sensitive journalism in the Colombian media. Gender-conscious journalism challenges gender stereotypes and portrays people whose voices are rarely heard in formal peace processes. Conflict-sensitive journalism means that interviews and information are handled with care. An interview can mean that a person for the first time talks about their experiences from a conflict.

- The media has an incredible power in influencing the political agenda and can ensure that women's experiences and opinions receive the attention they deserve, says Malin Palm, gender adviser at the organization International Media Support and the person behind the 1325 program.

The peace agreement - A historic event

Colombia was the first in the world to include a gender perspective in one peace agreement. It happened in 2016 when the guerrilla group FARC and the then government signed a peace agreement that would later be approved by Congress. It was a historic victory for the Colombian women's movement. The formal peace process had begun with a gathering in Oslo consisting of six men from the FARC and six men from the government. Only one woman was present - a representative of the Norwegian government. But through organization, the women's movement succeeded in getting both parties to listen to individuals' experiences of oppression during the time that followed the formal peace.

- It is so important what the movement got through. Not only did they manage to include a focus on women, but they also managed to include an LGBTQ focus, which is also something that is historic, says Laura Gil.

Media oppression of women in Colombia

But Laura Gil and her colleagues suspected that the positive results achieved by the women's movement during the peace process had not affected the Colombian media. The organization International Media Support therefore conducted an investigation of the country's media - and the staff was able to confirm their thesis.

- It was much worse than we thought, says Laura Gil.

People testified that they do not feel represented in the local media. Rather, there has been oppression of women in the media. Women account for only 23 percent of all sources in the Colombian media. In 67 percent of the articles where women are involved, the interviewees are painted as victims, according to the global media review Global Media Monitoring Project 2020. The staff of International Media Support spoke to individuals who had been interviewed for newspaper articles and saw a common thread through the testimonies.

- It was a constant complaint - "I did not say that", said many women, says Laura Gil.

Then Laura Gil and her colleagues went to El Espectador, the country's second largest newspaper, with one goal in mind.

- Let's do an experiment by creating a journalism that is participatory, Laura Gil and her colleagues suggested to the newspaper.

It is about a co-production where the women that the media articles are about are also part of the editorial staff. The goal is for people to feel more fairly represented in the media by being involved in creating the material. It is a process where both staff, journalists and sources learn a lot about how the media can be developed during the work. But some results exceed expectations and have been appreciated for its provocation.

- We see certain texts that are so co-produced between the journalist and the source that they both sign the article with their name as author, Laura Gil concludes.