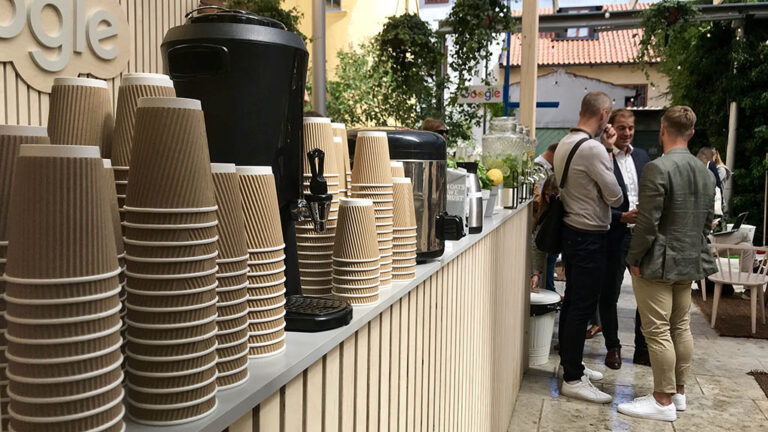 Many companies are on site in Almedalen to discuss sustainable development. The question is whether and how companies go from word to deed. Photo: Sofia Brännström / FUF

At the same time as the companies invite to talk about sustainability in Almedalen, climate experts believe that the business community must act faster. FUF's Sofia Brännström has listened to different perspectives on what is actually required for sustainability and action on the companies' agenda.

Almedalen 2019 is in its second day. The sun is shining and here business and politics meet.
Sustainability and entrepreneurship are a big commitment. A commitment that Sweden has signed.
In 2015, the countries of the world set 17 global goals for environmental, economic and social sustainability
development. 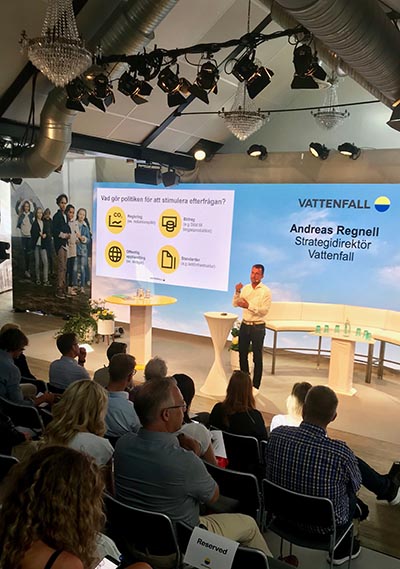 In order for sustainability to be on the companies' agenda, demand, solutions and financing are required. That is the opinion of Andreas Regnell from Vattenfall, at a seminar focusing on the climate. Coffee is offered and is almost full on Mellangatan in Visby.

Further up on Mellangatan, chairs are lined up in a courtyard and a tent protects against the sun. Ingrid Petersson, from the Agenda 2030 delegation and the Research Council Formas, says that we must investigate whether we can strengthen the legislation linked to human rights and the requirements for sustainability reporting. Otherwise, it will be difficult to really integrate the sustainability goals into the business world.

We consume as if we had four globes

According to the OECD's report from 2016, goal 12, on sustainable consumption and production, is the goal where Sweden faces the greatest challenges. The average Swede consumes as if we had four globes, according to the World Wide Fund for Nature WWF. This means that Sweden is one of the fifteen countries in the world with the largest biological footprint per person.

Andreas Regnell, strategy director at Vattenfall, believes that there are already solutions on how we can drastically reduce emissions. But for companies to accelerate the transition, it is necessary that the demand for sustainable products gets a boost going forward, he says. As it looks now, many companies are stuck in a phase 22 where one or more of the components are missing: demand, solutions and financing.

- If these three components are in place, there is as much money as possible for this type of investment, says Andreas Regnell, strategy director at Vattenfall.

In March 2019, the Agenda 2030 delegation submitted its final report. The delegation has, on behalf of the government, produced proposals on how the global goals can be implemented. The delegation states that increased competition, economic growth and more people in work would be the consequence if companies' negative impact on society decreased.

To make it easier for companies, increased requirements are proposed for sustainability reporting and strengthened legislation on human rights and companies' actions. It should also be investigated whether authorities can have higher requirements for reporting sustainability, says Ingrid Petersson at the Agenda 2030 delegation.

There is a risk that workers are left without protection and exploited when Swedish companies trade in emerging markets that do not respect human rights, gender or child rights perspectives. Therefore, the Agenda 2030 delegation thinks that Swedish companies that violate human rights in other countries should be able to be prosecuted in Sweden in accordance with international conventions and guidelines that Sweden has already signed.

- Sweden has many multinational companies that are pioneers. But there are companies that could do significantly more than they do, says Ingrid Petersson, chair of the Agenda 2030 delegation.

Parul Sharma, human rights lawyer and former chairman of the Agenda 2030 delegation, has sharper criticism in his new book, The Production Chain. She believes that we need to control the supply chain much more in order for it to be responsible. Today, there is no legislation for the purchase of products or services from high-risk countries. This means that Swedish companies that make mistakes to a large extent have impunity, she says.

The conversion will cost

The delegation believes that the transition to sustainable companies will initially cost money. But at the same time, companies play an important role in society when it comes to finding new solutions.

- That the fossil-free must not cost more than the old is the wrong way of thinking. Think instead: which fossil-free solution is the best, what is the most effective way? And do not compare with the old solution, says Andreas Regnell at Vattenfall.

Sustainability and entrepreneurship are discussed further in Almedalen - at mingling and new seminars. Colorful global-goals-symbols adorn lavish rooms, signs
and gardens. Undoubtedly, knowledge stores are replenished. The question is whether and how companies go from word to deed, now that concrete obstacles are being lifted.

Ingrid Petersson at the Agenda 2030 delegation believes that there is understanding within the companies - and that Sweden has a good starting point internationally to achieve the goals.

- The companies see that in the future there is no market if they do not work with sustainability, she says.

The government appointed the Agenda 2030 delegation in the spring of 2016. Their task was, among other things, to produce a proposal for an action plan for how Sweden should work to achieve the global goals for sustainable development.

In March 2019, the delegation completed its mission and presented its final report. It is available to read in the Development Archive.