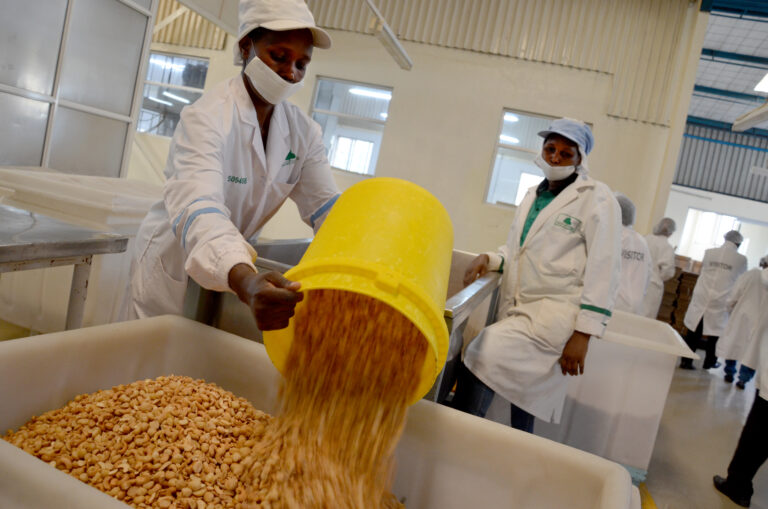 Work at a cattle factory in kenya. Photo: Anna Nylander.

The Covid-19 pandemic has hit the world's poor and already vulnerable workers worse than feared. More than 500 million full-time jobs have been lost around the world during the first months of the pandemic, according to the UN agency ILO.

The Covid-19 pandemic has affected and changed the world labor market in many ways. This summer, the International Labor Organization, ILO, estimated that 400 million jobs would disappear globally, but has now grown to over 500 million full-time jobs with lost income corresponding to at least SEK 31 billion.

Even before the pandemic, it was well known that the climate crisis, demographic change, robotisation and digitalisation have major effects on the labor markets globally. The unions for international development cooperation, Union to Union, work worldwide with trade union partners for democracy and decent working conditions for workers in low- and middle-income countries. In sub-Saharan Africa, there are particularly major challenges, according to Tendai Makanza, regional coordinator for the global industry union IndustriAll.

- When the communities closed down, it was extremely difficult to work from home due to lack of infrastructure in the region. Many workers in the mining industry, for example, were also quickly called back to work, despite the lack of protective equipment and measures to protect them from infection. The lack of social safety nets has plunged many of the workers in the industrial sector into poverty, says Tendai Makanza.

According to Tendai Makanza, the unions have only limited scope to work for change.

- Many governments in the region have not consulted the unions on how to deal with the consequences of the pandemic. The unions were also affected by the strikes and their ability to organize workers was limited. This happened at a time when violations of workers' rights were increasing. The violations were alleged to be necessary to limit the spread of infection.

In sub-Saharan Africa, the population will grow to 1,7 billion by 2040, which is almost a doubling compared to today. Demand for meaningful and sustainable employment is high and continues to increase.

Difficult for workers in Uganda

According to Adwoa Sakyi, coordinator of the IUF, the global union for workers in the food, agriculture, hotel and restaurant industries, workers in the informal economy of Uganda lost their livelihoods when society shut down this spring.

- People can not work when societies close down. Then they get no income and have no money for food.

The necessary adjustment to make economies more sustainable and fossil-free will also have major effects on jobs. In other words, the consequences for workers and their children and families are extensive. Especially if people do not get or can not make their voices heard in decisions about jobs and the future - or get their human rights respected.

Fair politics has a clear effect

The experience of this very special year has shown that the negative effects of the pandemic are less in countries where workers and their representatives are involved in designing measures to meet the crisis. A recent report from Prime Minister Stefan Löfven's Global Deal initiative, Social Dialogue, Skills and COVID-19, highlights the importance of co-operation between the social partners.

Many of the efforts made to protect workers include various types of social insurance and job creation programs. There are many lessons to be learned here in order to be able to deal with the parallel crises that the world's workers are facing.

But several low- and middle-income countries cannot afford to finance everything on their own. In order to succeed in turning the megatrends into something positive, strong support through development assistance is therefore required.

One of those already affected by future challenges and the effects of the climate crisis on the working environment and conditions is Damaris Muhika, administrator at the central trade union organization COTU-K in Kenya.

- We need support from our international development partners to create awareness of the connection between climate change, occupational safety and loss of income, she says.

Report: A Changing World of Work

In October this year, Union to Union launched the report A Changing World of Work - what does it mean for international development cooperation? The report describes the challenges in the future labor market in low- and middle-income countries and provides recommendations for how they can be managed. In November, another report on a fair climate change will be launched: "Just Transition in the international development cooperation context".

Cecilia Grabos is an advocacy adviser at Union to Union who coordinates LO, TCO, Saco and their affiliates in the international trade union development cooperation. The organization is non-partisan and non-religious.