On a crowded street corner, between a bakery and a butcher shop, without any signs or timetables, a bus passes twice a day. Once entering the city, once leaving it. Taking the 4-hour bus ride south from the capital Bogota, you eventually reach Sumapaz, a rural district with a national park making up a large portion of its area. Mostly known for the national park with its incredibly rare landscape called a paramo, few people realize that when you enter Sumapaz you have not actually left Bogota's territory. Even less known, is that there is a small population of around 2300 inhabitants residing throughout the region.

Although jurisdictionally a part of Bogota, Sumapaz is distinctly different to the capital. Rather than tall buildings, there are steep mountains, where you are more likely to be stopped on the roads because of cows crossing than because of traffic. You meet people in wide-brimmed hats and thick ruanas, the hat and poncho that make up the campesino uniform, excitedly greeting you, because this is rural Colombia. Sumapaz is a farming population, maintaining individual plots of land, growing and producing their own foods, and largely being self-sufficient. They are farmers, the Spanish term for peasant farmers.

We meet Alex and his wife Monica, a young couple, at their farm where they prepare to get on with the day's first task; milking the cows. Although manageable to do single handedly, it is a quicker job to do with the help of others, so it becomes a family affair. Having finished the first task of the day, Alex straps the full barrel of milk to his back and they make their way back up the hill to their house. Breakfast is served back in the kitchen, where a giant pot of soup has been stewing on the wood-burning stove most of the morning.

For Gerardo, an older man living on his farm with his wife and grown children, the workday continues with potato harvesting. Potatoes are one of the few things able to grow in the paramo. This is because a paramo is a unique, high altitude, cold climate tundra-esk ecosystem with high humidity and rainy season all year round, making it difficult to farm. Sumapaz is one of a handful of such ecosystems in the world and also the largest. By hand, he collects enough potatoes to fill one sack. Potatoes are a staple in the farmer diet, and many collected today will be used in the household while the rest will be sold in local markets.

This is an average day for a farmer, farming and maintaining their land rather than adhering to formal business hours. Instead, they live self-sufficiently and rely on the help of their community. Their occupation is so intrinsically intertwined with all other aspects of their lives, that the term farmer is not a sufficient translation. Being a farmer in Colombia is not a career choice, it is a culture and a way of life.

This rather romantic description of Sumapaz starks in contrast with its recent history of violence. The region played a significant role in the armed conflict that plagued Colombia for many years, as guerrilla groups heavily occupied the area in an attempt to make their way closer to the capital. With the approach of the guerillas, the military was sent in to keep them out of the city. As a result, there are today over 200 registered victims of violence in the region, and many more that are still unreported.

Things began to improve after the official peace treaty signing between the government and FARC guerrillas in 2016. The people of Sumapaz now have access to better welfare. Yet not everything improved. Despite the official ceasefire, there continues to be a strong military presence in Sumapaz.

- Because this is an area that was run by guerilla, the military do not realize there are others (civilians) here, explains farmer Alex while we visited him, as reason for farmers still fearing combative violence from the military.

Armed conflict between the military and other armed groups has caused a lot of displacement among rural people, many of whom were left homeless and struggling to survive in the cities instead. The fear of another wave of violence is very strong. The biggest concern is that the country will be sold to multinational companies to exploit the resources, causing displacement as well as the destruction of the unique ecosystem in the process.

For generations people have been farming the harsh lands in Sumapaz, the knowledge and traditions of doing so passed down through generations. When that relationship is challenged, in the form of displacement or environmental changes, farmer culture begins to change too.

- Maintaining our culture as farmer, maintaining our identity, our way of cultivating the land, this is something we are losing, people are forgetting how to do it, says potato farmer Gerardo.

Sumapaz is a strongly united community that has integrated resistance into their lives. It is as a united front that campesinos face the potentially harmful decisions made by the state. There is a sense of effortless resistance in Sumapaz as well. By effortless I do not mean easy but rather unintentional, because the mere fact of being a farmer implies resistance.

The struggles that many still face despite the peace treaty, begs the question; is peace truly in effect? If a community is at risk of losing their culture due to negligence of the state, has peace actually been achieved? The fact that part of everyday life in peacetime Sumapaz involves resistance in some form indicates that there is a lot yet to be done.

Nellie Banestig is a trainee at the Latin American Groups. 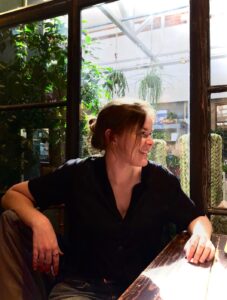