Consumption is a natural part of life. We have to eat, transport ourselves to and from work, buy new shoes when the old ones are unusable. But our casual and often unconscious over-consumption creates problems we may not be aware of. We often hear that we have to cut back on shopping, but what we may not associate it with is consumption's connection to peace and security.

If everyone in the world were to consume like we Swedes, it would require 4,2 planets. That's three too many. Globally, humanity is consuming 70 percent more resources than the earth is able to recreate in one year, and several major scientific reports show that we need to change our behavior - now. It is therefore important that more consumers understand how one's choices affect the environment and health, but also justice. Because we can use our consumer power to reduce the negative impact of our consumption, and at the same time increase our positive social impact.

We put pressure on natural resources

It is difficult to see the consequences of our overconsumption in the local environment. Half of the emissions from our consumption come from imports. The goods are often produced in countries far away where people suffer from pollution due to chemicals and emissions, and poor working conditions. With a growing population and economic development also comes higher demands on living standards, where we in the western world put pressure on natural resources. Our lifestyle creates conflicts over the limited resources available.

An example is the high demand that our unsustainable overconsumption places on oil supply. Several countries have suffered civil wars due to oil conflicts, such as Angola, Congo, Liberia and Sierra Leone.

Sustainable consumption, on the other hand, means making demands on what you buy. That you, for example, demand fair and safe working conditions for workers and growers when shopping for textiles or electronic gadgets. They are two of the industries where workers are exposed to toxins, chemicals and unsafe working conditions. Most often in countries from which we also import a lot.

The fashion industry has a turnover of SEK 15 billion every year and is the world's second dirtiest industry, only the coal and oil industry is worse. The demand for cheap and fast production of clothes is both unsustainable and unfair as it leads to water shortages and water pollution in the production countries. In order for jeans to look worn, so-called sandblasting is often used to wear away the color. The method is banned in Europe because it can be extremely dangerous to workers' health, but still occurs in Southeast Asia and North Africa. When sandblasting, workers inhale quartz dust that can cause serious illness. For example, the incurable, and unfortunately common, disease stone dust lung.

Another problematic industry is the electronics industry. We are consuming more and more electronics, new products are constantly coming on the market and the technology is rapidly becoming old and outdated. Electronics affect the environment during the entire life of the gadget, from mineral extraction, to manufacture and use. And it does not end there, because what then happens to e-waste is perhaps the worst. At landfills in poor countries, where as much as 70 percent of our e-waste is exported - despite the fact that e-waste is exported to developing countries within the EU - there is child labor, dangerous and harmful working methods, poisoning of water sources and the environment.

In the manufacture of electronics, a variety of rare metals are needed, such as tin, tungsten, cobalt. Precious metals such as copper, gold and platinum are also used. These metals are mined in mines and in the mining industry both environmental considerations and human rights are lacking. More than half of the world's cobalt comes from an area that stretches across Zambia and Congo-Kinshasa. In addition to the environmental degradation from mining in Congo-Kinshasa, the extraction of tin, tungsten and gold is exacerbating the conflicts between the army and rebel groups in the country. And not least, it has been shown that child workers occur.

Must put pressure on companies

As a consumer, it is difficult to find electronics with sustainably produced metals. Boycotting is also not always good because many people depend on the mining industry for their livelihood. What you can do is put pressure on companies and demand products that are produced with regard to the environment and human rights. If enough consumers demand better alternatives, companies must eventually listen.

So what can you as a consumer do?

Unsustainable consumption hinders the cycle of environmental degradation and conflicts over our valuable natural resources. You as a consumer can influence - partly by not overconsuming, partly by consuming circularly and taking advantage of what we already have. We have a global impact through our local choices in the store and on the internet. It's time for us to start seeing the real cost of our products, which is so much more than the price in dollars.

Alexandra Davidsson is general secretary of the association Conscious Consumption. She is also a member of FUF's network for Global Sustainable Peace and Security. Photo: Daniel Söderberg 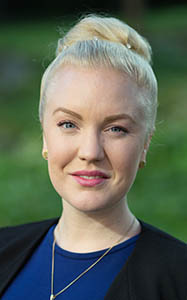