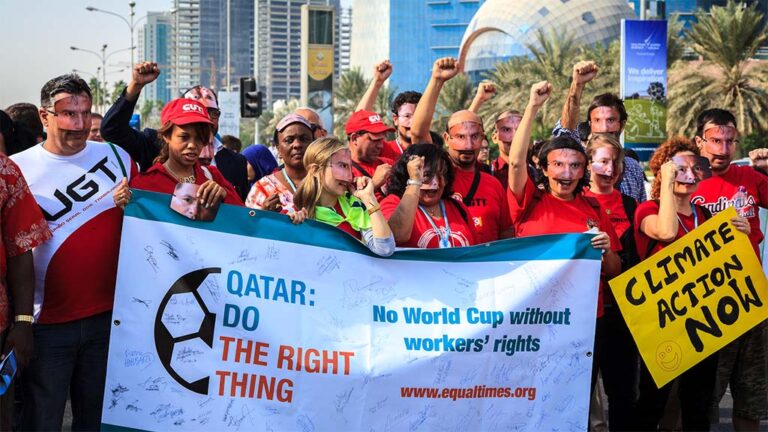 Several countries have clearly distanced themselves from the International Football Association's FIFA World Cup 2022 being held in Qatar due to the country's human rights violations. In Norway has several voices were raised to boycott The event and the national team have openly shown their dissatisfaction with Fifa during the qualifiers. Both Germany and the Netherlands have followed Norway's example. Swedish football association (SvFF) has instead of boycotting the event chosen to try to put pressure on those responsible to get human rights respected. SvFF writes in one open letter to Fifa that they want the guest workers' working conditions to be investigated and that the workers are to be protected from poor working conditions.

Before Qatar will be the host country the migrant worker who built the event's infrastructure such as arenas and hotels. The guest workers who made it possible for Qatar to be the host country have, if they have been paid, received the minimum wage. A minimum wage that barely covers their expenses and many of the workers have barely been able to afford food. Over 6 of Qatar's migrant workers have died since Qatar was awarded the World Cup hosting and according to The Guardian it is believed that many of them worked with the world championship.

Of Qatar's total workforce, 95 percent guest workers. In recent years, workers' rights have improved somewhat, but many major problems remain and the country's government continues to push for exploitation and forced labor. Employees are often in a position of dependence on their employers and lack opportunities to influence their working conditions as trade unions and the like are not allowed.

Lack of rights for more than guest workers

In the debate, it seems almost exclusively the lack of rights for migrant workers that is raised despite the fact that the country has considerably greater problems than that. Women in Qatar lack the fundamental right to make decisions about their own lives. Getting married and traveling abroad are some examples that by law require a male guardian's permit according to one new report from human rights organization Human Rights Watch (HRW). Women also do not have the right to be the primary guardian of their children and face widespread discrimination in almost all aspects of life according to HRW. A woman who reports rape risk to be prosecuted because it is considered evidence of sex outside of marriage which is illegal under Qatari law. Something that raises the question, why does the football debate focus exclusively on guest workers and why are the oppressed women not considered as important?

Qatar has recently introduced laws that can be seen as backward-looking when it comes to freedom of expression. It is now criminal to criticize the emir and since last year, a person can receive up to five years in prison for spreading false rumors, but it is not stated anywhere who decides whether a rumor is false or not.

Not the first sporting event to provoke debate

The World Cup in football is far from the only sporting event where the host country's approach to human rights has been highlighted. Ahead of the 2008 Olympic Games in China, it was questioned how a country could compete lack of human rights could be assigned to the host. Olympic Games in China are now being planned again. To let China be the host country for the Winter Olympics 2022 has according with the BBC compared to repeating the same mistakes as when Nazi Germany in 1936 hosted the Olympics. Now more than 180 different human rights organizations are calling for a boycott of the event due to China's crimes against the country's minority groups, according to the BBC.

It may seem that it has historically been unprofitable to protest against countries with a lack of human rights being allowed to act as host countries, but there are times when sporting events have been moved. The World Hockey Championship 2021 was previously planned to be held in Belarus but has been moved after extensive protests. However, the Swedish Football Association maintains that a boycott is not the right way to go and has therefore been criticized for not doing enough. How Sweden and the rest of the world act in the matter not only affects the upcoming world championships but can be a clear stance for the future. Qatar has, according to Expressen, great influence in the football sphere and to accept the country as host of the world championship would be to let football reach a new level of self-interest for the organizers and let hosting be bought through corruption and the sport disgraced by vulgarities.