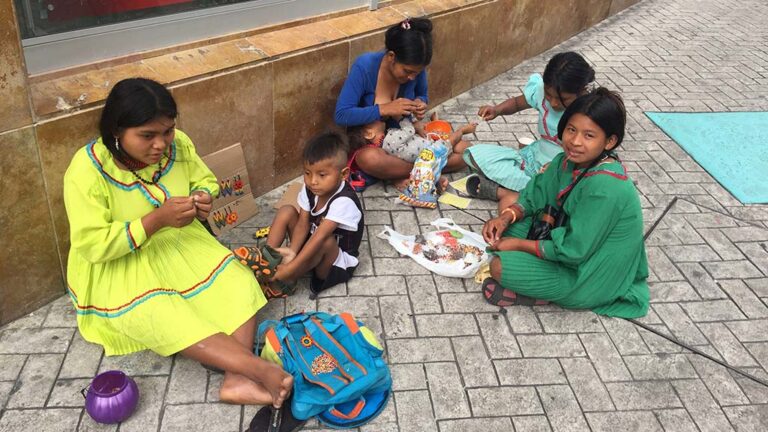 What caught my attention? The young people who juggled,
dancing in front of the traffic jams, washing car windows during the queue or the young women sitting on the street
and manufactured jewelry.

I was in Ibague, a city in northwestern Colombia with nearly 500 inhabitants.
Before my trip to Colombia, many people became curious, "Are you going to Colombia?"
"It's very dangerous there, isn't it?" To be honest, these thoughts swirled around in my head and mine
anxiety and nervousness grew as the journey approached. But once I was there, I can state that I
did not feel any fear of anything, I thrived like the fish in the water. I never got
such a loving, caring and warm treatment. People who have almost nothing like that
gives so much. All their hearts.

On my third day of the trip, I decided to take to the streets of Colombia
and corners to get to know the country and the young people better. I chose a park there
I have previously seen that there were lots of young people. I came in contact with two young men in
the park that sat on a park bench made of concrete. One man was 23 years old and the other 20 years old. One
smoked marijuana and the other had never tried. On the ground lay french fries on plate off
carton, they offered me and I thanked and received one. They told that young people most often
seen in the park to use drugs or have access to free Wi-Fi, that there is a place there
young people with different backgrounds and interests can socialize. Everyone was welcome here. Around
around me I saw how everyone laughed and shone with joy.

I asked them about their thoughts on the government. They said that much of the problem lies in the availability of quality education. The universities in Colombia cost a lot and if you can't afford it, you have a lot in common
no chance at a proper job.

- This can lead to choosing an easy and faster
income; rob and sell drugs. Of course, this does not apply to all young people, but a significant one
part, said the men.

They also said that their great passion is mountain biking, another haven for some
young people, just like the park. They are usually a large group of guys who gather and leave
dawn to different cities where they cycle in different forests and mountains.

- It's the best I know, when I feel the worst, it's enough for me to take a ride with my bike. It gives me
very much joy and peace, said one of the guys.

They asked me if I liked Colombia.
- I love Colombia, I replied. You feel welcome and feel joy from people.