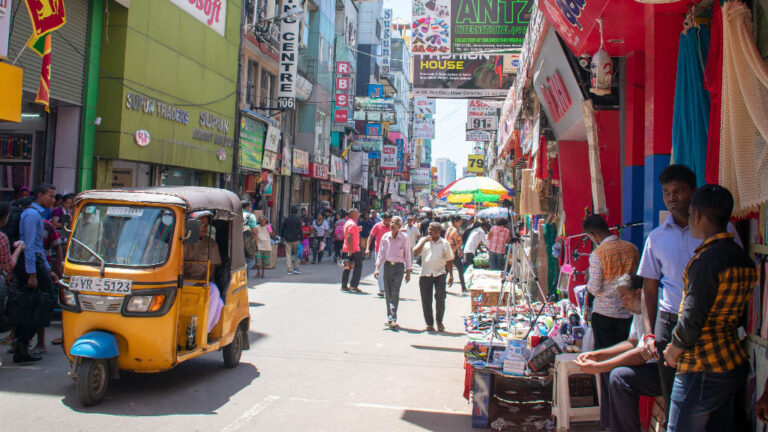 When life began to change in Sweden, it still looked as usual in Sri Lanka's capital Colombo.

"There is no corona here." That's about how it sounded when I traveled to Sri Lanka from India three weeks ago. Most Sri Lankans I spoke to seemed most concerned about reduced tourism due to the advance of the virus. But just like in other parts of the world, the situation has changed here as well.

On the way from the airport, the taxi driver says that he does not worry much about the spread of the virus. I heard similar reasoning from hotel staff, waiters and tuktuk drivers at the beginning of my trip. When I'm out walking on the famous Nine Arch Bridge in the town of Ella, I meet a man asking for a lighter. I have none but we start talking anyway. It turns out that he owns a small cafe nearby that he has had to close. There are no tourists here because of the virus, he says. When I tell him I'm from Sweden, he shakes his head. "You should extend your visa and stay here, it's much safer," he says and goes on.

But everything is changing fast. When I step into the train station in the city of Kandy a few days later, I see for the first time most people with mouth guards. I also hear a man coughing loudly through his mask and see how people around him turn their backs. Later that evening I meet two Swedish girls who two weeks ago started their long journey in Asia. The plan was to travel for two months, but with the virus' progress and several countries closing their borders, they are now at a crossroads and considering going home again. It is around this time that I am glad that my return trip is planned just a few days later.

On the way to my last destination Colombo, I see along the way large signs urging to wash their hands. The number of documented cases in Sri Lanka is currently around 20. In the capital Colombo, several shops, restaurants and tourist attractions are closed due to the virus. Sri Lanka has also stopped issuing tourist visas for most countries, including travelers from Sweden. At the hotel, the staff wears mouth guards and plastic gloves when they serve us dinner at the empty hotel restaurant. Every time I walk through the hotel entrance, my temperature is checked and I start to think about what would happen if it turned out that I actually had a fever. Would I not be allowed to enter the hotel then? Not likely maybe, but the situation is special to say the least.

If the spread picks up properly in Sri Lanka, I wonder what it will be like for those who live in the country, especially those who live far outside the cities where it is difficult to get around due to the poor condition of the roads and also difficult to get care. . Emergency care is not available outside major cities, private care is expensive and public hospitals are at risk of being congested.

When I landed at Arlanda last night, I felt relief, even though the spread is greater in Sweden. In any case, I would rather be at home where I have my security and know how the social system works. My thoughts go to all those who want but can not fly home right now, but are quarantined in different parts of the host. I realize afterwards that I could not have waited so much longer to go home and I am glad that I had time for a wonderful holiday.