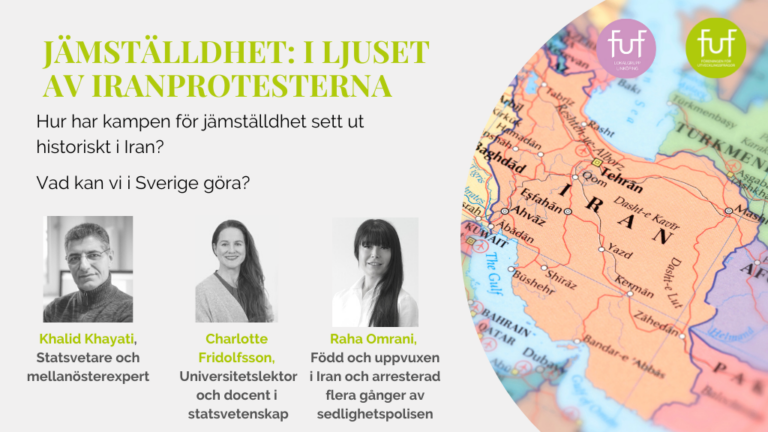 On September 13, 2022, Mahsa Jina Amini was arrested by Iranian morality police as they believed she was wearing the veil improperly. A few days later she dies in hospital. The death of Mahsa Jina Amini is the starting point for the protests against the forced veil in Iran.

FUF welcomes you to a seminar on the protests in Iran and the background to them. To help us understand recent developments and to discuss how the struggle for gender equality looked historically in Iran, we have Khalid Khayati and Charlotte Fridolfsson and Raha Omrani.

Khalid Khayati is a senior lecturer at Linköping University and researches and teaches in migration and diaspora and Middle Eastern politics. He also teaches political theory and international politics.

Charlotte Fridolfsson is a lecturer and docent in political science at Linköping University. She also has the assignment as director of the Forum for Gender Studies and Equality at LiU. She completed her dissertation at Örebro University in 2006 with a thesis dealing with political protest in a Swedish context.

Raha Omrani, LiU alumnus, is logistics and laboratory manager for a company in Mjärdevi Science Park and a well-known dancer, choreographer and dance instructor in Linköping. Raha was born and raised in Iran but moved to Sweden as an exchange student 13 years ago. Back in Iran, Raha was arrested several times by the morality police. Because of this, Raha now lives and works in Sweden.

The conversation will be held in English.

Can you not to be with of dishes? Sign up you of link above for sea information om the du may not be delta digitally.

The seminar is organized by FUF's event group, which consists of young non-profit committed members, together with FUF's local group Linköping.