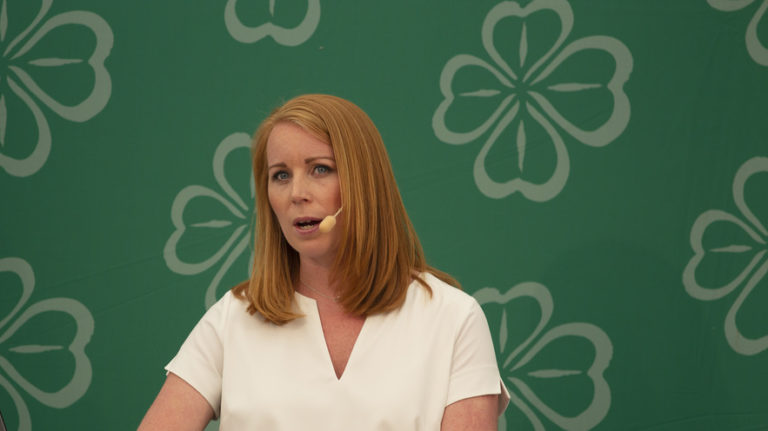 Wednesday's party leadership numbers are characterized at the beginning by a happy and motivated atmosphere. The Center Party's youth union sings cheers and claps its party leader. But the mood soon changes to another. Annie Lööf begins her speech by describing an attack on a Jewish parish home and explains that those who attack are "cowardly vomits who scream". Just then something happens in the audience. The Nordic Resistance Movement has taken its place and raised its banner. Describing the atmosphere in words is difficult and it is noticeable that many of us are taken and worried about what just happened. Lööf interrupts the speech and says that it is Nazis who are shouting. She pauses for a few seconds and it becomes quiet.

- So now they have been allowed to speak, says Lööf and is met by a long round of applause and people shouting "no racists on our streets".

The speech continues with Lööf in strong terms distancing himself from and rejecting all forms of extremism and hatred. It's serious now, Lööf repeats. She highlights the progress of extremism in several European countries, how liberal democracy is threatened and about US migration policy. However, there is no mention of the situation in low- and middle-income countries or developments at a global level.

Lööf continues to talk about the climate threat.
- We in Sweden are not immune to climate change, the warning signals must be taken very seriously.

Lööf states that the number of natural disasters has increased sharply over the past 18 years and that the month of May this year was the warmest since the measurements began. She briefly mentions how the already acute shortage of water in poorer countries will be exacerbated by a warmer climate. Something more detailed about ways of protecting people living in poverty against climate change is not mentioned. Instead, Lööf goes on to describe the need to reduce eutrophication in the oceans, especially in the Baltic Sea. Disturbing the balance in the oceans must cost more, she claims.

Lööf emphasizes the importance of finding green solutions that at the same time benefit growth. Lööf gives his confidence to the entrepreneurs and describes that without the entrepreneurs' entrepreneurship and innovation we will not be able to slow down global warming.

- It's serious now but the race has not actually been run. By standing up for green growth, we stop emissions, not development, Lööf states and is met with cheers from the audience.

Lööf's speech is described by two different types of threats, from extremism and climate change. However, we lack the parallel to development assistance and concrete examples of the threats must be addressed.