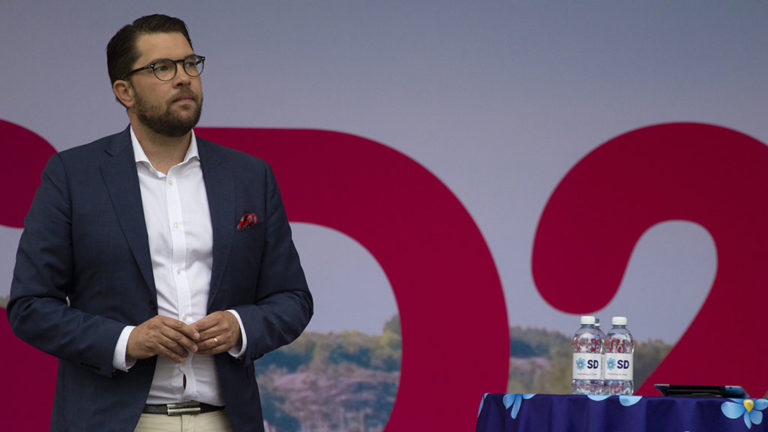 In his speeches, former party leaders have been careful to distance themselves from the Sweden Democrats and their ideology, but Jimmie Åkesson reminded the audience during his party leadership speech that the Sweden Democrats are growing in public opinion. He instead accused other parties of having lost touch with reality. To thunderous applause and cheers, Åkesson described it as the Sweden Democrats' goal to "develop the people's home" - by tackling the growing crime and strengthening welfare. Like other party leaders, however, he had no concrete examples of how this should be done, except by limiting immigration and enabling ROT deductions for the installation of home alarms.

- Insecurity is for real - for real people, Åkesson said when he presented his new security reform.

Earlier this week, Jan Björklund described during his party leadership speech how the fear of the damage that ideological nationalism can cause keeps him awake at night, terrified. In several proposals, he also opposed, in his eyes, good liberalism against destructive nationalism. Åkesson, however, chose to give answers to speeches with the same rhetoric. When he explained what keeps him awake at night, it was a matter of growing insecurity; that foreign-born convicted rapists are not deported; about compulsion in schools and about Islamism; on increasing segregation. In his final clip, he also included his second and final foreign reference for the evening, where he worried that other parties are too pro-European:

- Above all, friends of Sweden and Almedalen visitors, I am afraid of Swedish politicians who care more about the EU elite's grand visions of another 1000-year-old European empire instead of caring about Sweden.

The previous foreign reference also touched on EU cooperation and was most closely directed at Björklund and his EU dreams.

- If Jan Björklund had been allowed to decide [blue] yellow would not have been allowed to play in the World Cup. We should have cheered on Europe instead, he said and said that the Swedish World Cup enthusiasm is the clearest example of nationalism. After all, love for the nation is carefully consolidated in SD's program of principles, where they explain that one can cease to be part of the Swedish nation if one changes “loyalty, language, identity or culture”, the question is whether this also applies to them who cheers on teams other than Sweden?

Åkesson did not mince words when he responded to the criticism that is often directed at him:

- To talk about problems is not to paint black or play on people's fears, it is to take responsibility. Anyone who paints a picture and denies the problems acts irresponsibly.

Despite this, there were many problems, especially global ones, that shone with his absence during the speech and for which Åkesson, according to his own logic, does not take sufficient responsibility either.

Sweden's role in the world was not discussed, other than as a recipient of migrants. Åkesson believes, like Stefan Löfven, that this year's election will be a referendum on welfare - but that the incumbent Prime Minister will make a total misjudgment if he does not link today's welfare problems to the large asylum and relatives' immigration. In the speech, Åkesson then reminded how he and his party want to limit immigration, that the immigration that remains "must be positive" and not strengthen structures and segregation. In the party's election platform for 2018, we can get a little more details about what this would mean: a change in asylum legislation so that “Sweden will only receive asylum seekers from our neighboring countries and stop all asylum reception as long as Sweden's immediate area is safe” (p.4). In other words, it appears that all asylum immigration will be effectively stopped if the Sweden Democrats are allowed to decide.

- Everyone talks about us. Everyone relates to us, says Åkesson and at the same time ends his speech with an appeal to the Swedish Parliament: to take responsibility and start talks with the Sweden Democrats.
This autumn we will find out if his appeal will be answered or not.