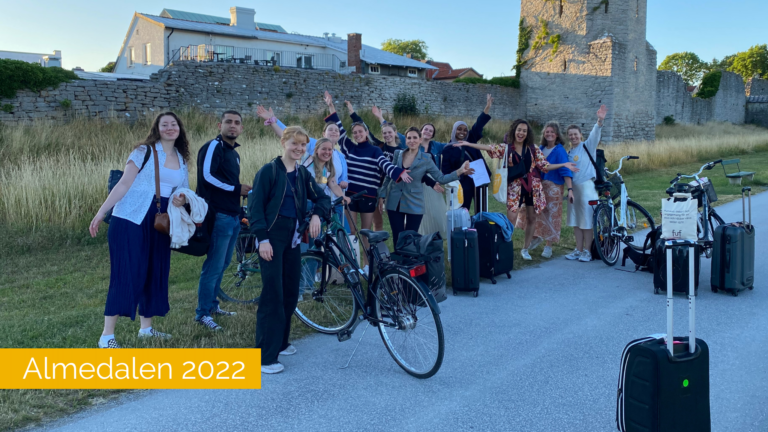 This year, FUF's non-profit editorial staff was finally in place in Visby again to cover global development issues during Almedalen Week. Among other things, we analyzed the party leadership figures, did video interviews and asked Almedalen visitors about how they view Swedish development assistance and how important they really think foreign policy is when they stand in the polls.

After a two-year pandemic break, FUF went to Almedalen Week for the tenth time with an editorial staff of young non-profit active members. During the week, you could follow the editorial staff's work to monitor what was said, or was not said, about global development issues. Read more about the results of the editorial work below.

But it was a different Almedalen week this year. Not least, the terrible murder of Ing-Marie Wieselgren, psychiatry coordinator at Sweden's Municipalities and Regions (SKR), cast a shadow over Almedalen Week's last two days. There were also fewer representatives from various civil society organizations in place in Visby, largely due to the Swedish government's decision to make historically large settlements on this year's development assistance budget. The settlements also meant poorer opportunities for civil society to invite partner organizations from other countries, and thus fewer first-hand perspectives were heard on many global development issues in Visby.

Neither Sweden's Minister for Development Aid, Matilda Ernkrans (S), nor her State Secretary, Jenny Ohlsson, were present in Visby. Questions about the settlements on development assistance and about the Social Democratic development assistance policy that FUF and several other actors in global development had thus had to go largely unanswered. Despite efforts, the editorial staff could not get a Social Democratic representative to ask about global issues. We consider it extremely unfortunate that the ruling party has been so difficult to reach during an election year.

This year, Almedalen Week was also shortened - from the previous eight days to five where the parties were instead allocated half days. The Almedalen editorial staff was on site during all five days to monitor Sweden's role in the world and the policy for global development.

FUF's editorial staff listened frantically to all party leadership figures and summarized on, and if so what, global development issues that the party leaders mentioned. The Moderates, the Christian Democrats and the Sweden Democrats focused in principle only on Sweden in their speeches, while other parliamentary parties, for example, touched on the climate, the war in Ukraine, NATO and Swedish development assistance.

Read more about what the party leaders said in their speeches »

Video interviews with experts and politicians

FUF conducted 46 interviews with experts, politicians and activists about, among other things, the policy for international development and Sweden's role in the world. SVT's domestic policy commentator Mats Knutson, the Green Party's spokesman Per Bolund and Sida's director general Carin Jämtin are just a few examples of people interviewed by FUF's editorial staff.

FUF's editorial staff took to the streets of Visby to ask Almedalen visitors about everything from what they think about reducing Swedish development assistance to how important they think the parties' foreign policy is when they vote.

FUF organized, together with the newspaper About the World, two seminars - Get vaccinated against misinformation and Vaccinate against evil. There, the panelists discussed not only the horrors of the world - but also how we could do to vaccinate ourselves against them. The panels included Archbishop Antje Jackelén, musician and human rights activist Ramy Essam, Civil Rights Defender's chief Anders L. Pettersson and rapper and freedom of speech activist Farima "Justina" Habashizadehasl.

At the end of each day, the editors broadcast live talk on Instagram where they reflected on what had happened during the day in Visby and told what the editors had in mind.

Reportage in text and audio form

These will be published continuously in the coming weeks on The development magazine.