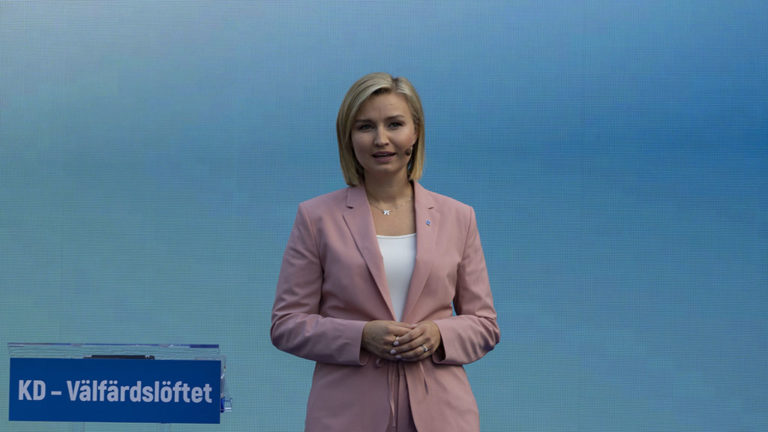 Almedalen Week is soon over and Friday is Christian Democrats Day. Ebba Busch Thor believes that we must have greater confidence in Swedish welfare, trust in the Swedish state and reform healthcare, care for the elderly and the police.

The Christian Democrats' party leadership numbers begin with a strong focus on the Nordic Resistance Movement's (NMR) presence during Almedalen Week. Busch Thor calls for resisting the Nazi forces in society and draws a parallel to his grandfather who was a resistance fighter in Norway during World War II. The Christian Democrats have long considered that participation in violent and criminal organizations should be criminalized, says Bush Thor.

- The rashes should not be allowed to share us, our answer today must be we are all Swedes.

Bush Thor talks about the Swedish people having been let down and draws parallels to returning to Sweden's "former glory" and to the values ​​that she believes have built our country strongly.

She is met with cheers and applause when she criticizes the Social Democrats and the red-green government. She describes how the red-green government has conducted a "welfare betrayal" over the past four years. Like previous party leadership figures, she calls for the Swedish people to unite and pays great attention to welfare, a traditional left-wing issue. According to Bush Thor, a strong alliance government is a necessity for standing up for humanity and the right spirit of Swedish welfare.

According to Ebba Busch Thor, a change of government and major reforms, such as increased salaries for health care staff and police, more places in elderly care and better cooperation between health care systems in different county councils, will solve the problems that exist in elderly care, health care and the police.

The Christian Democrats are in a difficult situation because they are lying and touching the parliamentary barrier. That is probably why the speech is largely devoted to attracting voters who believe in a united coalition government rather than the Christian Democrats.

The Christian Democrats believe that a vote for their party and for an alliance government improves Swedish welfare, but we want to know more about how they view Sweden's role in the world. The Christian Democrats' core issues do not concern global issues, which becomes clear when other parties provide us with an analysis of the world around us and have realized that various societal problems are connected with what is happening in the world.